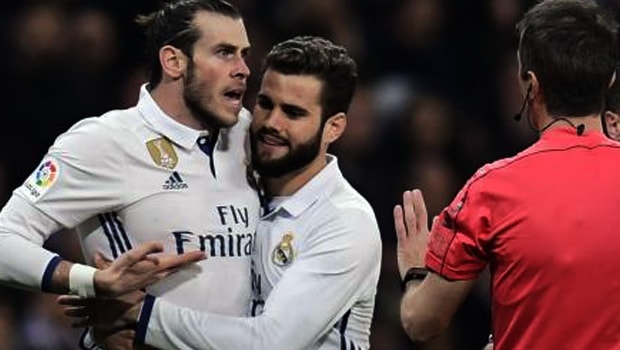 Gareth Bale feels the red card he picked up in Real Madrid’s 3-3 La Liga draw with Las Palmas was undeserved.

The Welsh winger tripped Jonathan Viera two minutes in the second half at the Bernabeu with the game level at 1-1.

Viera appeared to push Bale, who retaliated, and the Madrid player was shown a yellow card followed by an immediate straight red.

Viera and Kevin-Prince Boateng then scored two quick goals to give Las Palmas a sniff at an unlikely victory.

Cristiano Ronaldo netted a penalty on 86 minutes while the Madrid talisman then headed home in the final minute to salvage a point.

It was not enough however to stop Barcelona from claiming top spot in La Liga after they had earlier beaten Sporting Gijon 6-1 at Camp Nou.

Real now trail their great rivals by one point, although Zinedine Zidane’s side to have a game in hand.

Bale felt he didn’t deserve his red card, though he did apologise to his teammates.

“I don’t believe that it was deserving of a red card,” he told Real Madrid TV.

“I was shown the yellow for the foul, I was then pushed and I just pushed him [Viera] back.

I want to apologise to the team and the fans. I hope to learn from my mistake.”

Bale will miss the game at Eibar next weekend, with the possibility of a longer ban opened up by the referee’s report that he had been shown a straight red for a “violent” push on Viera when play was stopped for the initial foul.