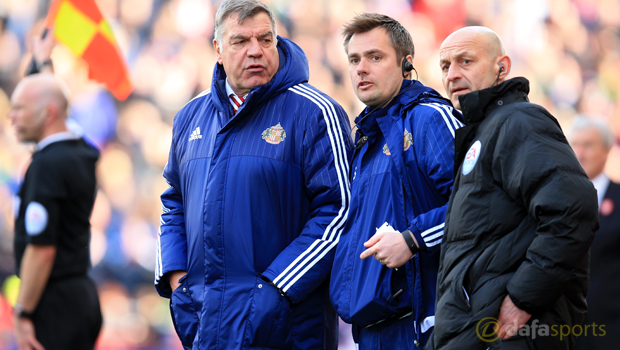 Sam Allardyce cut a frustrated figure after a 1-1 draw against Stoke left his Sunderland team in the relegation zone with just two Premier League game remaining.

Sunderland needed a late penalty from Jermain Defoe to come away from the Britannia Stadium with a share of the spoils.

Allardyce felt the big decisions did not go for his side for the second week running, but he did pay tribute to whistler Craig Pawson for awarding his side their last-gasp penalty.

He told reporters: “We can’t change the referee’s decision but the disappointment is how many points do they take away from us in this battle against relegation? “All this about people saying it evens itself out over the season is the biggest load of rubbish I have ever heard in my life.

“I am pleased that he was brave enough to give the penalty in the last minute.

It shows that he did hold his nerve, saw that blatant foul on Jermain, and gave us a penalty to get a very precious point in the end.”

While not the result that he desired, Allardyce was thankful for Defoe’s spot kick, which keeps the Black Cats within one point of Newcastle – while they crucially have a stronger goal difference than the Magpies.

“Jermain had to wait a long time but he got the penalty, and he deserved to take it, and put his goal tally up to 14 in the Premier League this year. He is one of the reasons why we still have a chance of staying in this league,” Allardyce added.

“It was not our best performance, so we probably gained a point instead of losing two.” Sunderland are 3.10 to win their next game at home to Chelsea on Saturday.