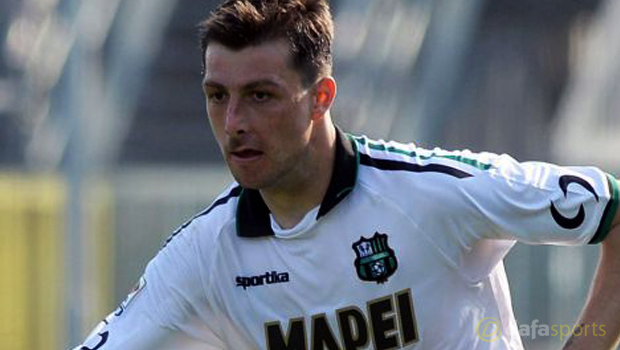 Francesco Acerbi insists his aim this season is to make Italy’s Euro 2016 squad and the defender is hoping his club form will be good enough to achieve this.

The 27-year-old, who earned his only international cap back in 2014, has been a stand-out performer for Sassuolo this season and his impressive performances have been key to their charge up the table.

He has managed to score three goals from 18 Serie A appearances and the club are firmly in contention for a European finish at the moment.

The Neroverdi have been indebted to the centre-back’s displays this term and the team have one of the best defensive records in the league to date.

Acerbi will need to continue this high standard of football for the remainder of the campaign if he is going to catch the eye of national boss Antonio Conte.

The latter, who is the former manager of Juventus, didn’t call upon the Sassuolo ace for Italy’s qualifying campaign, but there is still plenty of time for Acerbi to force his way into his squad.

Italy were impressive in their qualifying group for Euro 2016 finals as they topped Group H with seven victories and three draws, scoring 16 goals along the way.

Acerbi is still confident he can secure his spot on the plane for the event in France this summer and the former Genoa star insists he will work tirelessly to achieve this.

“I hope I will be picked for Italy, but the important thing is to do well with Sassuolo,” he told Sky Sport Italia. “A place in the Euro 2016 squad remains my goal.”

Italy, who are priced at 17.00 to win the tournament, have been drawn against Belgium, Sweden and the Republic of Ireland for the Group stage.