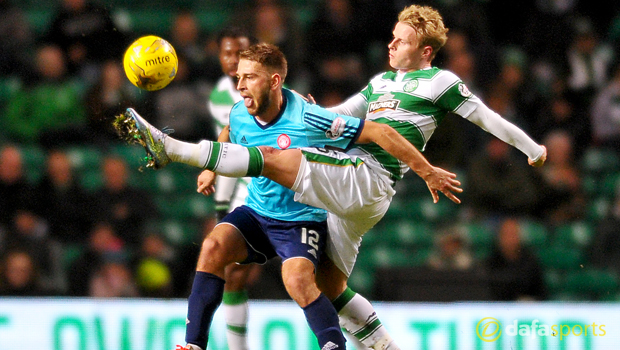 Celtic midfielder Gary Mackay-Steven is determined to try and become a more regular starter for the Bhoys in the second half of the season.

The 25-year-old moved to Celtic Park just under a year ago from Dundee United, but he has had to settle for a back-up role for much of the current campaign.

However, he impressed in the 8-1 Scottish Premiership thrashing of Hamilton Academical on Tuesday evening and is hoping that he has done enough to persuade head coach Ronny Deila to give him a run in the side.

He told the Evening Times: “I knew there would be spells in and out of the team.

“I’m just trying to work as hard as I can in training, trying to catch the manager’s eye and hopefully after this I’ve done that.

“I’m just biding my time, I know what I can do and want to show that when I get a chance.”

The Bhoys are back in action on Saturday when they play host to St Johnstone, with Celtic aiming to make it five consecutive victories in all competitions.

Leigh Griffiths will be looking to maintain his amazing run of form against the Saints, with the striker having found the net eight times in those four wins on the trot against Partick Thistle, Stranraer, Dundee United and Hamilton.

The 25-year-old has scored no fewer than 27 times in all competitions already this season, a tally that includes 20 goals in the Scottish Premiership.

And with the Glasgow giants holding a six-point lead at the top of the table, Aberdeen are 1.17 to win the Scottish Premiership title if Celtic are omitted from the market, with Hearts available at 4.50.