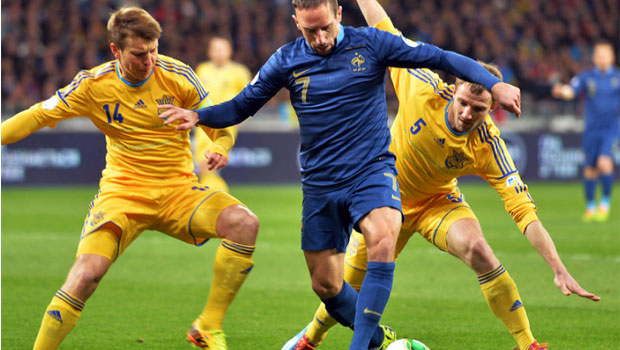 After losing 2-0 in Ukraine on Friday, France face an uphill task if they are to avoid missing out on a World Cup finals place for the first time since 1994.

On that occasion they lost out after losing in the play-offs to Bulgaria, and now coach Didier Deschamps must rouse his side to turn things round against Ukraine in Paris if they are not to suffer the same fate.

The national side has been lambasted in French newspapers, with some calling the squad “the worst ever assembled”.

Les Bleus did little to dispel that accusation on Friday, with Samir Nasri in particular singled out for his lack of thrust in midfield.

Deschamps admits that his side were clearly second best in the first leg, saying: “One side played a top-level match and we played just a match, like it was an ordinary game.

“We took a slap in the face. This is what the top level is. The players have it inside of them and they will have to show that on Tuesday.

“To achieve something extraordinary, we have to be in that state of mind, to think that it’s possible. There’s a possibility. No matter if it’s small or great – it’s real.”

Defender Laurent Koscielny is suspended after his red card in the first leg, so Liverpool centre-back Mamadou Sakho is in line to start alongside Eric Abidal if Real Madrid’s young starlet Raphael Varane fails to shake off a knee knock.

Nasri may pay for his lacklustre effort on Friday by being dropped in favour of Mathieu Valbuena, while Karim Benzema could start in attack.

Ukraine have had their fair share of disappointment in past World Cup play-offs (bet on brazil world cup), losing out to Germany in 2002 and Greece three years ago, but have put themselves in a great position to board the plane to Rio.

However, they will have to cope without defender Olexandr Kucher after he was red carded on Friday, while left-back Artem Fedetskyi, who kept Franck Ribery quiet in the first leg, is also suspended.