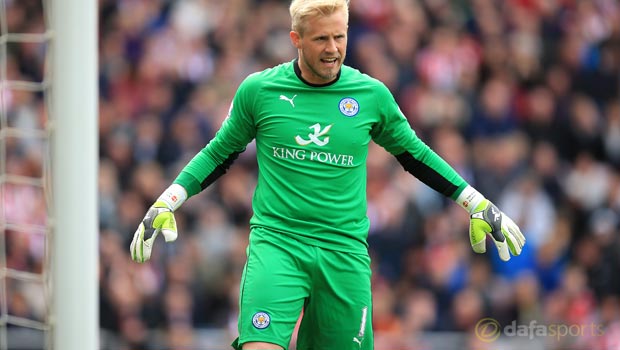 Leicester goalkeeper Kasper Schmeichel has stressed he is happy at the King Power Stadium amid reported interest from Arsenal.

The Gunners are on the hunt for a new shot-stopper and have been heavily linked with Chelsea’s Petr Cech.

However, Cech is also thought to be a target for Manchester United and as a result Schmeichel, the son of United legend Peter, has now been linked with a switch to the Gunners.

The Danish international didn’t categorically rule out a move away from the Foxes but Schmeichel stressed he is happy with Leicester and isn’t looking for a transfer.

“I’ve played for four seasons in Leicester, and they are happy with me, and we have a good working relationship,” he told the Daily Express.

“This is where I see my immediate future.

“A club transfer isn’t in my thinking. I am in a club where there are good coaches and owners, and it’s great.”

Schmeichel played a key role in Leicester’s end of season heroics with five clean sheets in seven games as the Foxes surged up to 14th place in the Premier League table, having spent a large chunk of the campaign stranded in the bottom three.

Leicester are under no pressure to sell the 28-year-old as Schmeichel signed a new four-year deal less than 12 months ago, but a big bid may tempt them into cashing in on the highly-rated keeper.

Leicester are 5.00 to be relegated next season, while Arsenal are available at 5.50 to win the Premier League after finishing third in the 2014-15 campaign.