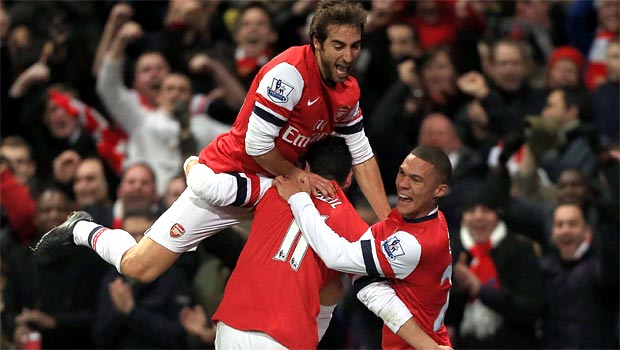 Arsenal midfielder Mathieu Flamini feels that his side now has the physical edge needed to compete for a Premier League title.

The Frenchman returned to the club in the summer on a free transfer from AC Milan and his presence in the middle of the park has helped the club progress both domestically and in Europe.

Mesut Ozil’s signing grabbed the headlines but Flamini’s work has not gone unnoticed and he has helped the Gunners to the top of the Premier League table.

Arsene Wenger’s side appear to have their best chance in a number of years to add some silverware to their collection, and Flamini believes their claims for a first trophy since 2005 are more than realistic.

“What you need in any Arsenal side is the fighting spirit and you can see we now have that,” Flamini told the Daily Star.

“Perhaps the physicality has been missing a bit in the past few years. But if you want to win leagues and cups, sometimes you have to fight for it, especially when you are playing in the hardest league in the world.

“We have a very good offensive team but it is so important to be strong defensively as that could make the difference at the end of the season. You have to go to places like Newcastle and be prepared to fight before playing your football. Only by doing that can you win.

“We know this is a marathon, a long burner. We have to stay very focused and work as hard as we did at Newcastle. That’s all we can do.”

Arsenal host Cardiff on New Year’s Day and will definitely be without Ozil, Kieran Gibbs and Aaron Ramsey, while Thomas Vermaelen, Nacho Monrael, Tomas Rosicky, Jack Wilshere and Olivier Giroud are all doubts.