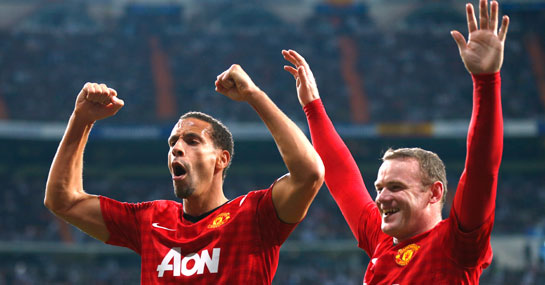 Following Manchester United’s 1-0 victory over Reading that saw them forge a seemingly unassailable 15-point lead at the top of the Premier League, Sir Alex Ferguson confirmed that he would give his blessing and allow Rio Ferdinand to join the England squad ahead of their World Cup qualifiers.

The defender, with 81 caps to his name, was called up for the first time under Roy Hodgson’s reign this week, with his last international appearance nearly two years ago.

It had seemed that a 2-2 draw with Switzerland in June 2011 would be his last in an England shirt when Hodgson decided not to name the 34-year-old in his Euro 2012 squad last summer.

But Ferdinand has been rewarded for a return to form this term for his club with a recall to the international scene.

He was one of the star performers for an under-par United in a narrow 1-0 win on Saturday, with a marauding run from the back setting up the winning goal from Wayne Rooney.

Yet Hodgson may have wondered if his call would be answered in the affirmative when Ferguson – often keen to shelter his veteran players from the toils of international football – was the first to cast doubt on whether a return would be prudent.

Ferguson admitted earlier in the week that he was as surprised as anyone to see Ferdinand recalled, believing that his uplift in form this season was in part due to his absence from the England scene.

The manager therefore suggested that he would seek the advice of the United medical team before advising Ferdinand on the course of action to take.

So with John Terry now retired and Joleon Lescott lacking match practice, Hodgson will be relieved that Ferguson has since given his blessing.

England currently lie second in Group H, and welcome San Marino to Wembley on Friday 22nd March before travelling to group leaders Montenegro on Tuesday 26th March in what could prove to be a crucial few days for Hodgson’s men in their quest for Brazil 2014.