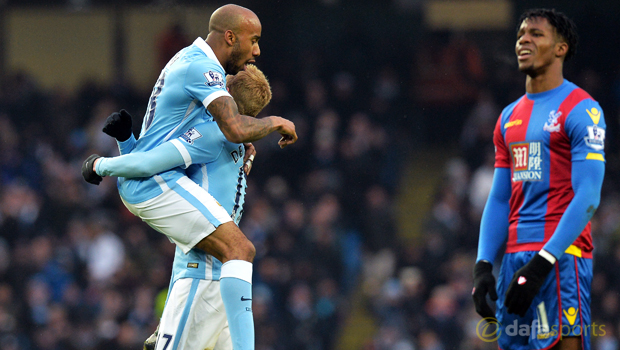 Manchester City midfielder Fabian Delph earned the praise of boss Manuel Pellegrini after he played a key role in the 4-0 win over Crystal Palace at the Etihad Stadium.

England midfielder Delph joined City from Aston Villa for £8million last summer but his first season in Manchester has been plagued by injury.

The 26-year-old is now starting to make his mark however, and the City boss is impressed with what he is seeing.

“I’m very happy with his performance. He had bad luck at the start of the season with different injuries. He has settled down now, has a good work ethic and gives us good build-up,” Pellegrini said.

Delph was involved in England’s Euro 2016 qualification campaign as they won all ten of their games to book a spot in the finals this summer.

He will be keen to issue a reminder to Three Lions boss Roy Hodgson that he is still very much a man in form, and Pellegrini said his breakthrough goal against a Palace side that arrived boasting the Premier League’s meanest away defensive record was vital.

“It was very important to score the first goal so we had more space,” added the Chilean

“With more space, this team is more difficult to stop, with so many good players attacking, and that allowed us to score more goals. Without space, we are a team that always scores goals, with space of course we are even more dangerous.”

Sergio Aguero scored a brace and David Silva added a fourth as City showed no hangover from the scoreless draw with Everton on Wednesday night.

England, 13.00 to win Euro 2016, have been paired with Wales, Russia and Slovakia in Group B for this summer’s tournament in France.