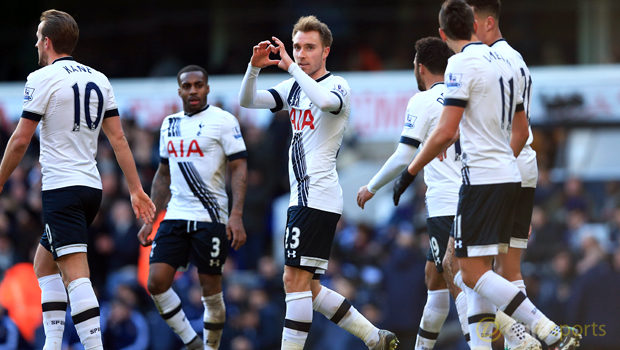 Mauricio Pochettino has backed Christian Eriksen to rediscover his best form after the midfielder scored twice in the 4-1 win over Sunderland at White Hart Lane.

The Danish playmaker has found it hard at times this season to replicate the excellent form he showed last term but his manager says it is important to remain patient with the former Ajax man.

Eriksen will continue to endure peaks and troughs according to Pochettino, who says he is still very much a developing talent.

“It was very important that he scored. He is very talented; one of the best players we have,” Pochettino said.

“But we need to understand that he is still very young, only 23. We need to give him some time and the opportunity to have ups and downs in different periods during his career, and during the season.”

Spurs found themselves a goal down when Patrick van Aanholt slotted past Hugo Lloris four minutes before the interval.

Having lost at home to high-flying Leicester City on Wednesday night, it was important for Pochettino that his side responded quickly.

Eriksen scored within two minutes and Spurs were comfortable from the moment Mousa Dembele put them in front on the hour mark. Eriksen scored his second before Harry Kane netted a late penalty in what Pochettino felt was a key victory.

“This was a very important victory,” added the Argentine.

“It was a good reaction. We have shown a good performance in the last few games, with different results, but it was a great effort from the team and the squad, and very important to take three points.”

The win ensured Spurs consolidated their place in the top four, moving on to 39 points.

Tottenham are 1.54 to finish in the top four this season and 15.00 to be crowned Premier League champions.