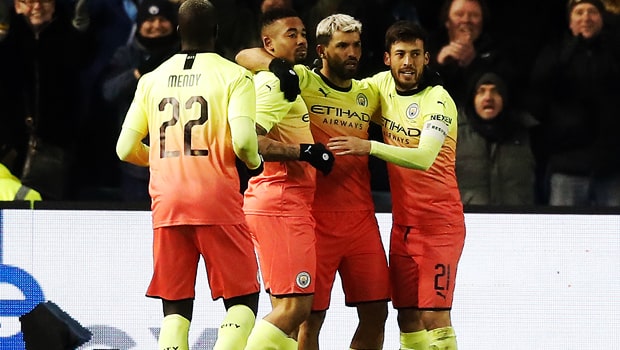 Manchester City and Leicester City have both joined Arsenal in the next round of the English FA Cup after both teams overpowered their respective lower league opponents.

At the Hillsborough stadium in Sheffield, Manchester City was made to work through the thick of their skin to get a 1-0 victory against Championship side Sheffield United.

Despite the intense dominance from the Premier League champions, they had to wait until the 54th minutes before Sergio Aguero broke the deadlock.

Neither sides were able to get another goal, and Pep Guardiola’s side went on to win the game with the solitary goal to proceed to the quarter-final.

At the King Power Stadium, Leicester City continued their impressive run of form in the English FA Cup with a similar 1-0 win over Birmingham City.

Ricardo Pereira’s 82nd-minute strike gave Leicester the win that took them to the next round of the Competition.

In Wednesday’s other fixture, Norwich City continued their fine run by shocking Tottenham Hotspur on penalties.

Jan Vertonghen gave the Jose Mourinho-led team the lead in the 13th minute of the first half, but Josip Drmic equalized in the 78th minute.

Both sides went into extra time after failing to find a winner in the regular time, but after 120 minutes, both sides were still tied, and to penalties, it went.

Dutch goalkeeper Tim Krul was the superhero as he saved two spot-kicks to deny Troy Parrott and Gedson Fernandes after Erik Pamela had hit the post.

Norwich won 3-2 on penalties to progress to the Quarter-Final for the first time in 28years and will now face the winner of the Derby/Manchester United tie.

Sheffield United will host Arsenal, Newcastle, and Manchester City as well as Chelsea v Leicester City are the rest of the FA Cup quarter-final fixtures made from the draws.