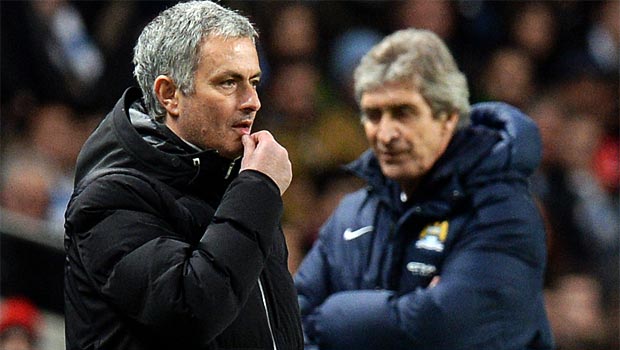 Manchester City cleared another obstacle in their push for an unprecedented quadruple of titles this season, although Manuel Pellegrini was keen to play down the significance of the FA Cup win over Chelsea.

Stevan Jovetic and Samir Nasri scored the goals in a convincing 2-0 victory over Jose Mourinho’s men which saw City book their place in the sixth round, while eliminating one of their biggest rivals in the process.

The win was especially sweet as it came just 12 days after a 1-0 reverse in the Premier League – a defeat which makes the title race still too close to call, although City remain the favourites at 2.04 despite lying third in the table three points off the pace.

The Citizens do have a game in hand though after the midweek game against Sunderland was called off and Pellegrini admitted that the postponement gave his players a much-needed break ahead of Saturday’s FA Cup clash.

Despite his captain Vincent Kompany’s assertion that it was ‘revenge’, Pellegrini was keen to downplay any added incentive for the win, while also dismissing talk of a ‘tactical masterclass’ over Mourinho.

“It wasn’t revenge that drove us – of course we don’t want to lose two games to Chelsea at home,” Pellegrini said.

“It’s so easy for me to talk about tactics because we won – I don’t think we had any tactical problems against Chelsea the other day – we know how they play, we know how we play.

“In the other game, we had two clear chances at the beginning, we missed and they scored. Today was not a tactical master-class from me
– I don’t believe in those things.”

City fans will no doubt be ever more hopeful of a clean sweep of trophies this season, but next up is a tantalising Champions League clash against Barcelona and Pellegrini is watchful of ‘quadruple’
talk, while admitting he may make changes to his side.

“We have two important fixtures – today and Tuesday, that’s why we had a mix of different players. We’ll see what we’ll do on Tuesday tomorrow,” Pellegrini stated.

“It’s one step more in a competition. I think for me the most important thing we did today was to beat a great team and also, I had a lot of questions after Chelsea, if we’re going to change our way of playing but I repeat, we will not change the way we play.

“Today was important to show why we continue to play in the same way.”

Despite an impressive home record this season, City are priced at 2.78 to take a first-leg advantage to the Nou Camp, with Barca the favourites at 2.37 while the draw is on offer at 3.35.