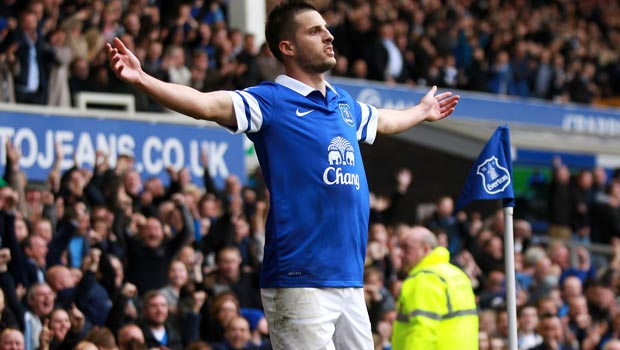 Everton boss Roberto Martinez has confirmed that winger Kevin Mirallas will miss the rest of the season with a groin injury.

The Belgian international picked up the injury in the 2-0 win over Manchester United on Sunday after he scored the second goal of the game.

Having limped off, Martinez has now revealed he has a small tear in his groin.

As a result of the injury, he will miss games against Southampton, Manchester City and Hull City.

The injury is a major blow to Everton’s European ambitions, with veteran defender Sylvain Distin also struggling with a hamstring problem.

Martinez admits he is disappointed to lose his in-form winger, but he is hopeful he can return in time for this summer’s World Cup.

He told evertontv: “Kevin’s scans came back and they have revealed a small tear in his groin.

“He is going to be out for the season, which is a real disappointment and a shame because he was in a phenomenal moment of form.

“But the memory we have of his performance against Manchester United is a terrific image. The way he took his goal and how he was a dynamic force throughout the game, it was an outstanding performance.

“It’s a great way to finish the season if it’s the last game he is going to be involved in this campaign. It is not a major injury. It could be anything up to five or six weeks, and that’s looking at the worst-case scenario.

“The most important aspect now is that we get him fully fit and ready to participate with Belgium in the World Cup.”

Martinez will now be hoping his squad can rally round ahead of the trip to Southampton, with the Toffees 2.40 to win. The Saints are 2.85 to win with Dafabet, and the draw can be backed at odds of 3.30.