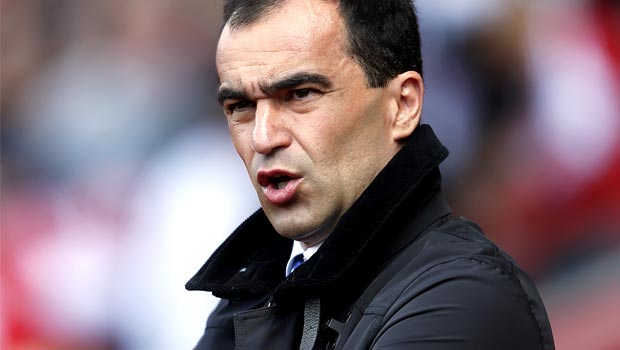 Roberto Martinez believes Everton will secure Champions League football ahead of Arsenal if they can win their last three games of the season.

The Gunners are back in pole position to claim fourth place after Everton slipped up at home to Crystal Palace last week, and Arsene Wenger’s men also look to have the easier run in.

Everton still have to entertain Manchester City, who are desperate for three points as they look to win the title, along with games against Southampton and Hull City.

Arsenal have to play Newcastle, West Brom and Norwich but Martinez still believes a further nine points, which would put them on 78 for the season, would be more than enough to do it.

“I think it is fair to say, just looking at the last 15 years or so, fourth place is well below 76 points,” said the Spaniard.

“There has only been one season where you have needed 76 points for that (fourth) and on average it’s always been a lot less points.

“You don’t go far wrong when you look at the points tally. We are well aware anything around 72 to 75 points is Champions League football so we are desperate to try to make sure we get that.

“I will go as far to say if you get nine points and you don’t get into the Champions League, you can be proud and very happy any way.

“That’s the target we are giving ourselves – how many points we can get from now until the end of the season.”

Everton travel to Southampton and are 2.45 to pick up a crucial win but there is nothing much between the sides with Saints 2.79 and the draw 3.29.