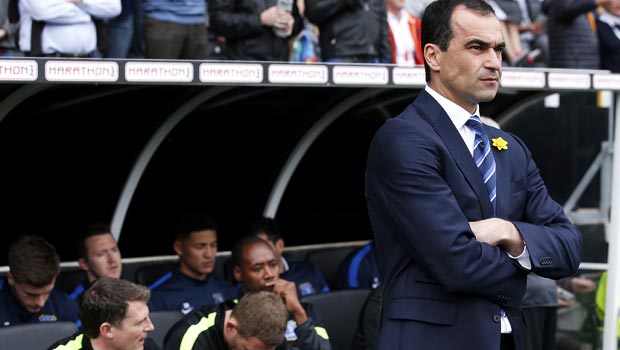 The Toffees are now right back in the mix for a top-four place with Sunday’s 3-1 victory over Fulham at Craven Cottage making it five straight Premier League wins.

February’s back-to-back defeats to Tottenham and Chelsea seem a long time ago and the Merseysiders are now just four points behind a stuttering Arsenal side with a game in hand on the north Londoners.

There are now just seven league games to go for the north-west club and sure to be plenty of twists and turns over the remaining weeks of the campaign, with Everton set to face the Gunners on Sunday, April 6 in what could be a straight showdown for fourth place.

But they also have to welcome both Manchester clubs to Goodison Park before the trophies are awarded, while a trip to in-form Southampton on April 26 looks a tricky contest.

Martinez’s charges face an away match against Hull City on the final day of the season and the Spanish tactician feels that nothing will be decided before Sunday, May 11.

“I think it will go down to the last day,” he said. “Nobody will stop fighting.

“Every game in this league is down to small margins. With the amount of points that we have, we have a realistic chance to fight for the top four.”

And the former Wigan chief is adamant that the remaining seven matches will all be tough, with clubs scrapping at both ends of the table.

“The intensity of every game is important and it doesn’t matter if you are fighting to avoid relegation, win a title or finish in the top four – it’s the same,” he added.