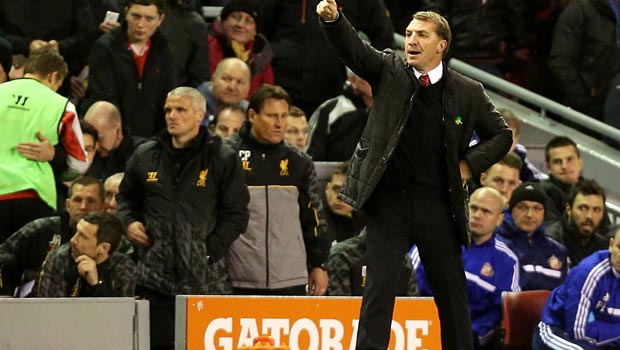 Liverpool boss Brendan Rodgers has backed his players to handle the pressure after another stunning display against Tottenham on Sunday.

The Reds, who are priced at 2.85 to win the Premier League title, are now setting at the top of the table and have their destiny in their own hands with six games of the season remaining after a 4-0 demolition of Spurs.

Victory in all six would be enough for the Anfield outfit to claim their first ever Premier League title and their first top-flight success since the 1989/90 campaign.

But they still have a couple of massive hurdles to overcome with both Manchester City, who are on offer at 1.70 to claim their second Premier League title, and Chelsea, now available at 8.00, set to visit the Merseysiders before the dust settles on the season.

Having not won the Premier League before, it has been suggested that Rodgers’s charges would buckle under the stress of being involved in a title race, but the Northern Irish tactician has rejected those claims.

“We don’t feel it,” he said. We’re very confident with how we play.

“You see the confidence in how the players pass the ball and the movement and the intensity and aggression in their play to know that they are very calm and focused on the job at hand.”

Liverpool’s next task will be to try to get past West Ham at Upton Park on Sunday and Rodgers has made it clear that he has already turned his attentions to that match and so will be watching Monday’s clash between the Hammers and Sunderland.

The Black Cats, who can be backed at 2.14 to win the game, are scrapping for their lives at the bottom of the table while one more win for Sam Allardyce’s men, who are on offer at 3.48, will probably be enough to secure their top-flight status for another season.