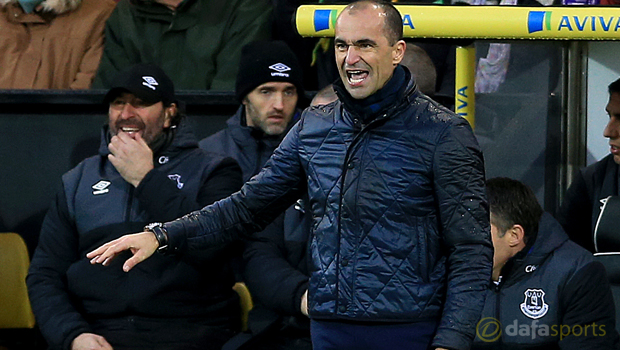 Stones was the subject of three bids from Chelsea over the summer and Everton, who are 10.00 to finish in the top four, stood firm rejecting all advances with the most lucrative offer reaching £30million.

Martinez made it clear that he wanted to do everything possible to keep the 21-year-old and even turned down a reported transfer request towards the closing stages of the window.

The defender has continued to develop in the heart of Everton’s defence this term and has struck up a decent partnership with summer arrival Ramiro Funes Mori.

Chelsea’s terrible season has led to speculation that they will return for Stones in January as they look to address their slump.

However, Martinez insists they will not be forced into any sales in January and expects Stones will be at Goodison Park at least until the end of the season.

Martinez said: “It doesn’t matter if Chelsea come back in for him. We created a squad to see how far we could go over 10 months. January doesn’t come into consideration.

“We’ll never lose anyone in January – unless it’s somebody who hasn’t been playing and we need to find a solution. If he’s a top performer, it’s not even a consideration.

“When you are right in the middle of a season, I think players understand that you can’t sell someone if you can’t replace him.
“I think the uncertainty comes in the summer, where everyone speaks about possibilities.

“January is a window to solve problems with players who are not featuring as often as they feel they should, or to bring in players from a lower league to give them an opportunity.”