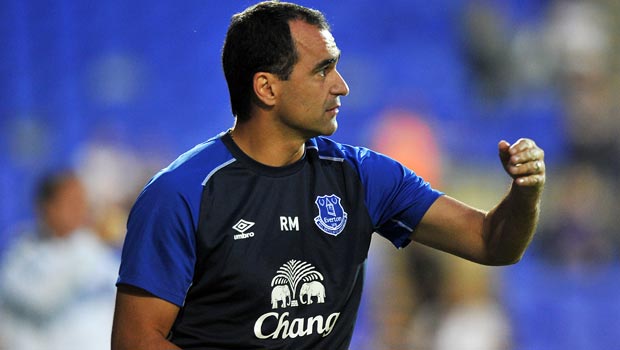 Everton manager Roberto Martinez has admitted that he wants to sign a winger before the end of the current transfer window.

The former Wigan Athletic boss has added plenty of quality to his squad this summer with Romelu Lukaku the marquee signing at Goodison Park.

Gareth Barry, Muhamed Besic and Brendan Galloway have all also joined but Martinez is still keen to add more players to his squad.

The Toffees are hoping to qualify for the Champions League this season after just missing out on qualification last year.

Martinez wants Chelsea winger Christian Atsu on loan, but media reports have suggested that the Blues want him to be playing week in, week out and have so far blocked the deal.

Speaking after the club’s disappointing 3-1 friendly defeat against Celta Vigo on Wednesday, Martinez said: “It’s only one position (we need).

“We want to take as long as we can to see how quickly we can get the injured players back to being available for the first-team. Probably another body would help for the September month when we have three competitions to fight for, and we’ll carry on working hard on that.

“Wide player is the position we want to bring in but in terms of names, it is too early to mention to our fans.

“But we are pleased with the numbers and the quality we have in the squad now. We have a couple of young players we know are ready and they are going to help, so the numbers are strong.

“All it is now is making sure that every day we sharpen up individually and as a team.”

Martinez now has just over a week to prepare his side for the trip to face Leicester City on the opening day of the new Premier League season on August 16.