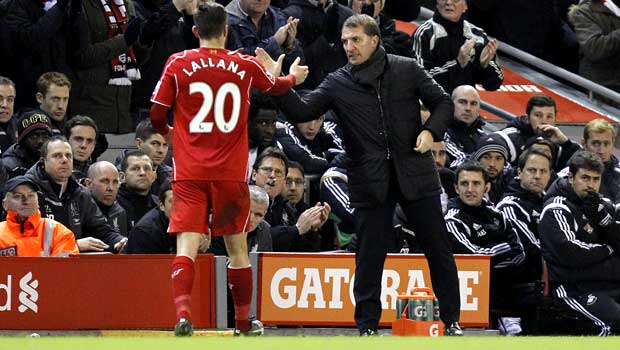 Liverpool boss Brendan Rodgers is pleased with the way his side is improving following their 4-1 victory over Swansea on Monday night.

The victory at Anfield over Rodgers’ former side lifted the Reds into the top eight of the Premier League and only five points off the top four going into 2015.

The Reds scored three goals in 18 minutes to help secure victory against a Swans side who started the game on Monday above their hosts in the table.

Rodgers believes that the victory – as well as some other impressive performances in December – shows that his side have improved dramatically following their early-season struggles.

He said: “It was an outstanding performance against a very good side in the top eight. For us to perform like that was very pleasing.

“A few weeks back we put a lot of work in to find a way to get that creativity back. We’ve seen in the last few weeks our intensity and pressing which leads to the creation of chances.”

The Northern Irishman was full of praise for his attacking trio, believing that Adam Lallana, Raheem Sterling and Philippe Coutinho are adapting well to the system that sees the Reds play without an out-and-out striker.

Lallana, in particular, was singled out for praise by the boss who believes the former Southampton man is starting to reap the rewards for working hard and adopting the high-pressing style that Rodgers expects of his players.

He continued: “You look at the effort my players put in tonight; pressure, intensity, squeezing, hunting the ball after only having a game a few days ago. [Lallana] got his reward for a great performance and work rate.

We asked the players to do that.”

Next up for Liverpool is a New Year’s Day clash with bottom-of-the-table Leicester at Anfield.

The home side are heavy favourites at 1.40 to seal the victory, whilst the struggling visitors are 8.01. The draw is available at 4.33.