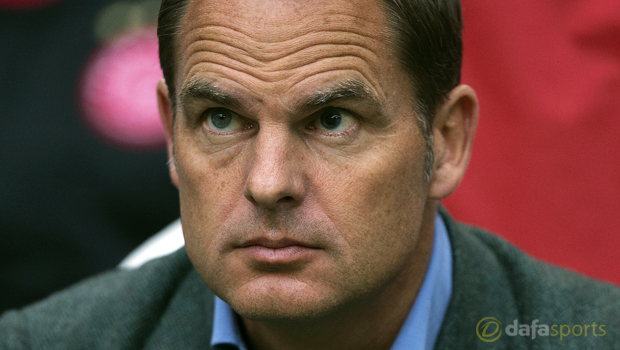 Frank de Boer is “the right man” to become the new Everton manager and could achieve “something special”, according to his brother Ronald.

The former Netherlands international left his position as manager of Ajax on Thursday and is a free agent.

He won four Eredivisie titles with the Amsterdam giants between 2011 and 2014 and missed out on a fifth last weekend to rivals PSV Eindhoven.

The Merseysiders are on the look-out for a new manager off the back of confirmation Roberto Martinez was sacked on Thursday following a 13th defeat of the Premier League season against Sunderland.

Ajax and Barcelona legend De Boer has emerged as a frontrunner for the vacancy and his twin sibling, Ronald, believes his brother and Everton are the perfect fit.

He told Sky Sports News: “Frank is interested in the Everton job, but it’s not up to him to make the move.

That’s up to the club. “In my eyes he’s the right man for that job. He thought he was going to fulfil his ambition of managing in the Premier League, but talks with Tottenham collapsed at the last minute.

Former Everton player and current under-21 coach, David Unsworth and ex-boss Joe Royle, who also played for the Toffees for eight years, will take temporary charge for the final game of the Premier League season against Norwich City on Sunday.

Everton, who came under new ownership in February when Iranian businessman Farhad Moshiri bought a 49.9 per cent stake, have made no comment on the speculation, but De Boer is in no doubt about his brother Frank’s ability to manage in the Premier League.

He said: “I think Everton would be a good fit for Frank. It’s the sort of club where he’d be given the chance to show his qualities and do something special.

“He made up his mind to leave Ajax two months ago because he needed a change.”

Everton are currently priced 1.80 in the match betting against Norwich, while the draw outcome is quoted at 4.00. The relegated visitors are available to back at 4.20.