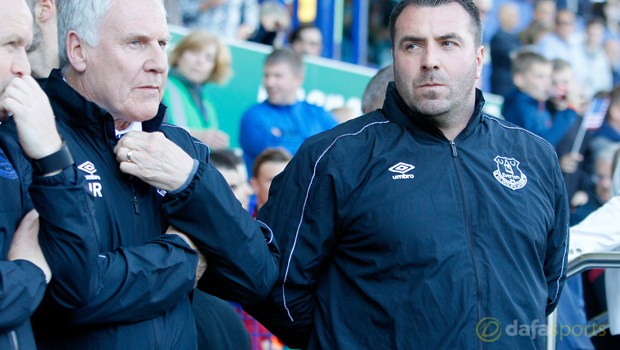 David Unsworth has revealed that being asked to take charge of Everton for their final game of the campaign against Norwich on Sunday was one of the proudest moments of his life.

The former Everton defender came through the ranks with the club’s academy before going on to play over 300 times for the Toffees over the course of two spells.

The 42-year-old has been placed in temporary charge of the senior side for the season finale following the sacking of Roberto Martinez on Thursday.

Martinez has struggled to get the best out of a promising squad this term and the board opted to part company with the Spaniard prior to their final game.

Unsworth will be joined in the dugout by former Everton manager Joe Royle along with ex-players Duncan Ferguson and John Ebbrell.

The caretaker boss revealed that Martinez had put his name forward to the board for the home clash with Norwich and admitted he owes a lot to his former boss for bringing him back to the club.

Unsworth said: “Being asked to take temporary charge of this club was a very proud moment – probably the proudest moment of my life.

“It was a difficult day on Thursday and it’s not in perfect terms, but straight after the Chairman had asked me to take charge, I got straight on the phone to Roberto and asked him if he was okay.

“And in typical Roberto style he told me it was him who recommended me to the Chairman, so that speaks volumes of the man and what I think of him.

“Irrespective of the football side, Roberto is great man and he will be a friend forever for me because he brought me back to the football club.

He allowed me to come back when Alan Stubbs was here and he gave me the Under-21 manager’s job when Alan went to Hibernian.

“I am sat here because of Roberto and I have got nothing but good things to say about him.”