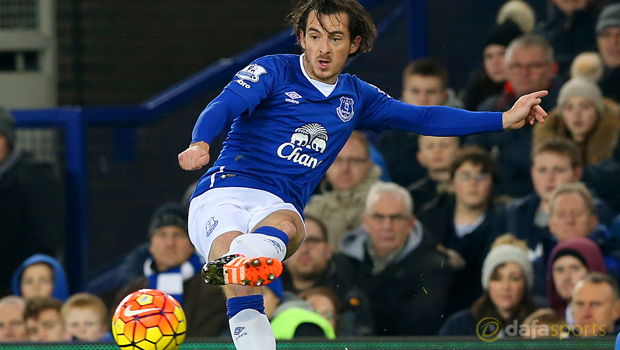 Leighton Baines admits Everton have struggled to manage games recently when they have been leading.

The Toffees were dominant in the first half of Saturday’s game at Norwich but despite creating a hatful of scoring chances, they only had Romelu Lukaku’s header to show for their efforts.

Wes Hoolahan struck a leveller soon after the break, Everton once more guilty of conceding from a set piece, and from that point onwards Baines felt the game became wide open.

Baines was starting his first league game of the season but the 31-year-old readily admitted Everton have not been able to maintain control in similar situations recently.

“We could score again but we could also concede again, we’re too open,” said the full-back.

“We have got to get better at controlling the game, ultimately, and keeping our composure.

“You see the top sides, and they might let a team back in, but they keep their composure and keep playing a certain way. We have got to learn a little bit.”

Everton led 2-0 in their previous away game at Bournemouth but the home side rallied to level matters let in the piece.

Ross Barkley scored a third for Everton deep into stoppage time but they still found time to allow the Cherries claim a draw.

Baines says if they have any designs on challenging the top sides this season they must learn quickly.

“We have got to be comfortable at 1-0 rather than leaving the door open for the opposition,” he told reporters.

“We give up too many chances because we are a bit open.

“It will come, I’m sure, but it has got to be sooner rather than later because the difference between a win and a draw is massive.”

Everton are 10.00 to finish in the top four this season while they are 2.05 to win their next game at home to Leicester on Saturday.