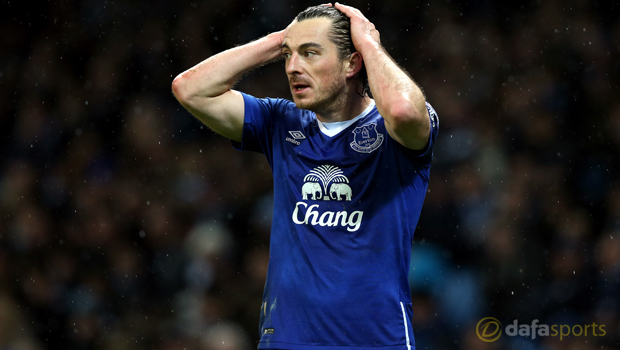 Leighton Baines feels there is a lack of chemistry in the Everton team at the moment and claims they are relying ‘too heavily on individuals’ in their pursuit of success.

The England international left-back spoke out following Sunday’s frustrating 1-0 defeat at Manchester United which left the Toffees languishing just below mid-table in the Premier League, with little chance of either qualifying for Europe or being relegated.

However, Roberto Martinez’s men do still have the FA Cup to aim for this term as they look ahead to a semi-final showdown against either United or West Ham, who replay their quarter-final at Upton Park next week.

Everton still have four matches to play before that semi-final on April 23 and Baines is hopeful the players can rediscover some form following a dismal run of three successive Premier League defeats.

The 31-year-old feels they need to start playing more as a team, while the desire to make sure of a place in the side for the Wembley semi-final should also spur on the players currently in possession of a shirt.

He told the Liverpool Echo: “I don’t think there is anyone expecting to have their name pencilled in for that game [the FA Cup semi-final]. But the motivation should be getting your name there.

“I just don’t feel as though the chemistry is quite there with the team on the pitch at the moment, and it hasn’t been for a while. We are maybe leaning too heavily on individuals to come up with something.

“We’re in games, we were in the game on Sunday and had a couple of chances, but we’re not performing as a team to the level we know we can or we should be.”

Everton, who are 3.50 to win the FA Cup, will look to return to winning ways on Saturday when they travel to face Watford at Vicarage Road.