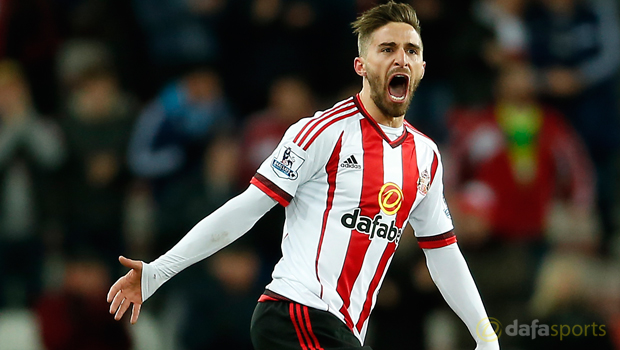 Sunderland striker Fabio Borini is adamant the four-point gap to the final position of Premier League safety is ‘not a lot’ to make up.

The 25-year-old Italian hitman spent the 2013-14 season on loan with the Black Cats from Liverpool and chipped in with seven crucial goals as the side pulled off ‘The Great Escape’ from relegation that year.

Looking dead and buried seven points adrift of safety, Gus Poyet’s side then took 13 points from a possible 15, including victories over Chelsea and Manchester United, as well as a draw with champions-elect Manchester City, to survive.

Therefore Borini, who penned a four-year deal at the Stadium of Light last summer to become a permanent player, feels the current side under Sam Allardyce are more than capable of digging their way out of trouble once again in the remaining seven matches of this season.

He told the Chronicle: “We’ve been in a lot worse situations before. It’s four points and there’s still seven games to go.

“Teams will still drop points and we can get wins against the Premier League leaders because the division is so crazy this year.

“Four points is not a lot. We’ve still got to go to Norwich and we’ve got a game in hand.”

The problem facing Sunderland is Norwich are the only side in immediate sight and they have found some form with seven points from their last three games.

The Black Cats, who are 1.33 to be relegated, also play host to title-chasing league leaders Leicester in their next match on Sunday.