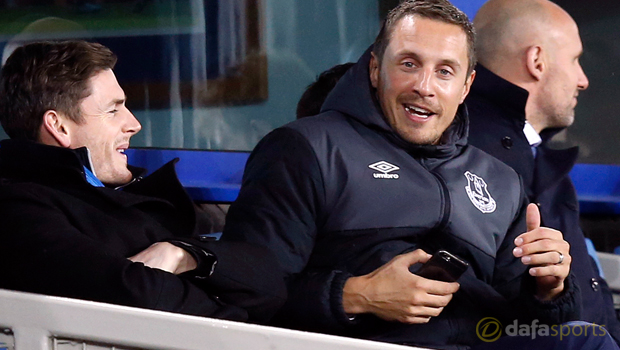 Everton manager Roberto Martinez expects Phil Jagielka to be back in competitive action at the start of 2016 after the defender made a return to light training.

The Toffees captain suffered a medial knee ligament injury in the defeat to Arsenal back in October and the centre-back has been missing for the last six Premier League matches.

Summer arrival Ramiro Funes Mori has been drafted in as the replacement but, despite the English side being unbeaten since the loss of their skipper, there are question marks being raised about the Argentine.

Everton have only kept two clean sheets in the last 13 games across all competitions and the inability to stop their opponents from scoring is hampering their charge for a European position.

The club are currently sitting 10th in the table, three points adrift of fifth place Tottenham Hotspur, but they missed a big chance to go level on points with Spurs after being held to a 1-1 draw at Norwich City last weekend.

Martinez’ men failed to put the Canaries away in the first-half and were made to pay as they ended up with a share of the spoils when it should have been more.

The return of Jagielka to the fold could help to solidify Everton’s leaky backline and the Spanish boss is confident of seeing the England international back in action sooner rather than later.

“Jags has been back running on the grass, which is always a very good sign,” he told Everton’s official website. “The next step is to involve him in more football, and the way Jags is, I feel we’ll see him back available very, very soon.”

Everton face table-toppers Leicester City on Saturday at Goodison Park and the hosts are 2.05 favourites for the win, a draw is priced at 3.50 while the Foxes are outsiders at 3.60.