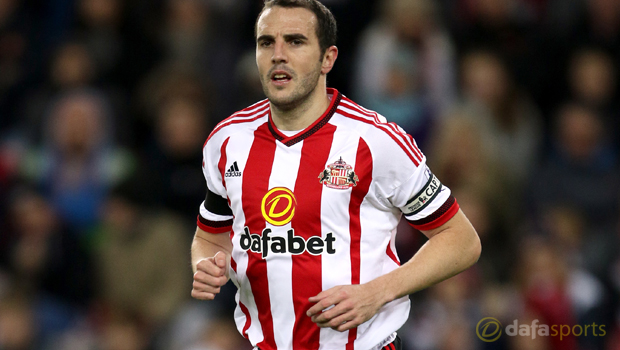 Sunderland captain John O’Shea is adamant his side can come out of a challenging festive period with some valuable points added to their tally in their quest for survival.

The Black Cats are battling against relegation to the Championship once again and the recent results have left the club languishing down in 19th place in the table.

Sam Allardyce, who took over after Dick Advocaat resigned earlier in the season, has brought a significant improvement to the side but the defeats keep on coming.

Back-to-back wins over Crystal Palace and Stoke City had many believing the club had turned the corner, but they were quickly brought back down to earth.

Successive defeats to Arsenal and, most recently, Watford has highlighted the enormity of the task and the fixture list doesn’t get any easier over the festive period.

Next up is an away trip to defending champions Chelsea on Saturday before an outing at the Etihad Stadium to take on Manchester City a week later.

Sunderland then welcome Liverpool to the Stadium of Light on December 30 and Allardyce’s men have not been given much of a chance of getting anything from those three fixtures.

However, O’Shea is confident some positive results can be picked, although the skipper admits his side must be on top of their game to do so.

“When we go down to Chelsea and Man City and face Liverpool we need to ensure that we are well prepared and ready for the challenge.”

Sunderland are 10.00 outsiders to defeat the Blues, a draw is priced at 5.00 while Jose Mourinho’s men are 1.33 favourites to turn around their poor form.