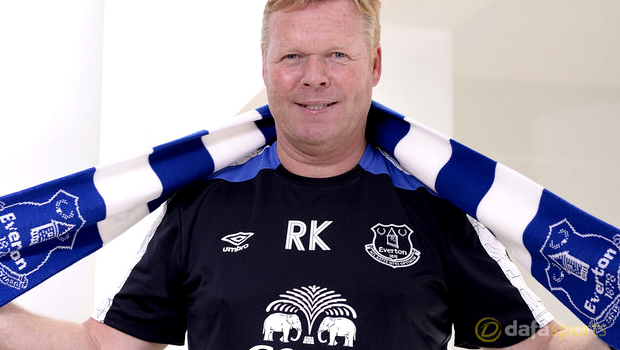 Ronald Koeman is targeting a return to the glory days of the past with Everton after being installed as the successor to Roberto Martinez.

The Dutchman left his post as Southampton boss to take up his new role on Merseyside and he says his goal is to bring back the good times to Goodison Park.

Koeman says he wants to get the fans behind his team by playing attractive, winning football and that, he believes, will help his bid to get Everton in the shake-up for silverware.

Rather than being weighed down by the Toffees’ past achievements, Koeman is relishing the chance to emulate the successful teams of old.

“Everton’s history is a big one and we will try to reach what they did in the past. That is difficult but everything is possible,” he said.

“The ambition is always to give the fans the spirit that they can see the team is fighting for everything and try to play good football – that is basic to get good results.

“We want to give them a good feeling every week about the team. We are looking forward to the start of the season.”

In two seasons at Southampton, Koeman led the Saints to eighth and sixth-place Premier League finishes, while Everton could only finish 11th last season under Martinez.

Koeman says he is excited to be a part of the plans at Everton, having listened to what the club’s powerbrokers want to achieve.

“When I had the first contact with the chairman (Bill Kenwright) and (majority shareholder) Farhad Moshiri about the interest from Everton I was interested to listen to what project they wanted for the coming seasons,” he added.

“I am very pleased to be part of that and that is really enjoyable.” Everton are 17.00 to achieve a top-four finish next season.