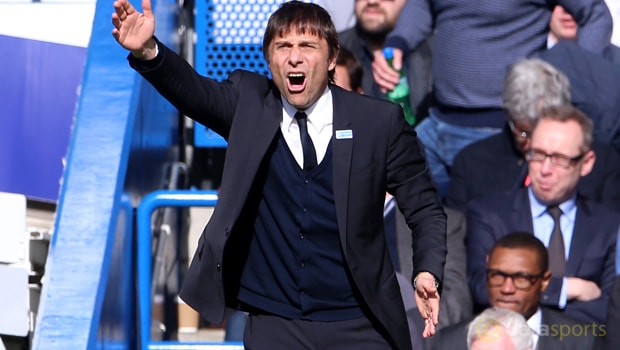 Chelsea manager Antonio Conte insists the title race is now ‘interesting’ after their 2-1 loss at home to Crystal Palace.

The Blues scored early through Cesc Fabregas but a quick double soon after from Wilfried Zaha and Christian Benteke paved the way for a shock Palace success.

Spurs closed the gap with a 2-0 win away at Burnley. Conte says he never expected the run-in to be straightforward, while conceding the neutrals and media will be pleased his side slipped up.

“For sure, for you [the media] it’s a good result, because it makes this more interesting in the championship,” Conte said.

“But I always said the league finishes when you have the mathematical [certainty] that you won.

“Otherwise you must fight, you must play every game to try to win.”

Chelsea laid siege to the Palace goal in the second half but a combination of some slack finishing and outstanding goalkeeping from Wayne Hennessey contrived to leave them suffering just a fourth league defeat in 29 games under their Italian boss.

Conte paid tribute to Sam Allardyce’s side but he insisted Chelsea were worth a point at the very least.

“They [Palace] played a good game, but we deserved at least a draw. We created many chances to score several goals.

Palace just scored two goals in two minutes. We are disappointed with the final result,” he added.

“We tried to play, we tried to force situations to score, now it happens, and it is important to prepare for the next game.”

Chelsea are 2.30 to beat Manchester City on Wednesday at Stamford Bridge while they are still 1.10 favourites to win the title.