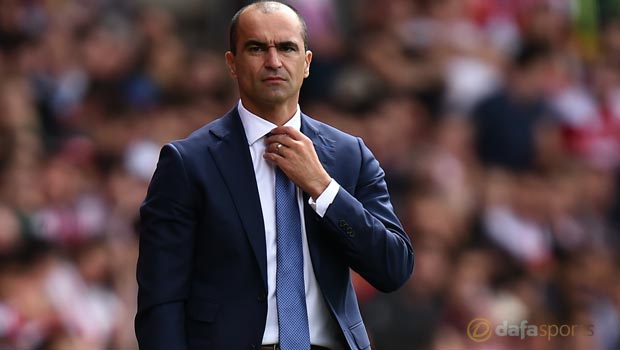 Roberto Martinez says he expects his Everton team to be ‘heavily tested’ when they face Swansea at the Liberty Stadium on Saturday.

The Toffees are on a high following last weekend’s Goodison Park win over champions Chelsea, while Swansea suffered their first league reverse of the season away at Watford.

Despite that defeat, Martinez is in no doubt that Garry Monk’s team will be a different proposition back on home soil.

“They are a unit that works hard for each other but they are also a technical side who want to get the ball. They are a possession team and they have players in very good moments of form,” said Martinez.

“The new signings have adapted really well into the pace of the game. This team is ready to replicate their success from the last campaign.”

Martinez knows the Liberty Stadium inside out having played for and managed Swansea and he feels the recent home victory over Manchester United shows just how dangerous an opponent Monk’s side are in south Wales.

“The way they performed against Manchester United wasn’t an accident at all. When you go to the Liberty Stadium you are going to be heavily tested and it will be a very good game of football because of the good form we both take into the game,” added the Spaniard.

Martinez praised Monk for the atmosphere and team spirit he has created at Swansea, something the Everton boss feels is reflected by the manner in which his new signings have settled in to life at the club.

Andre Ayew, signed from Marseille on a free this summer, has caught the eye of the Toffees boss with three goals in five Premier League appearances to date.

“He has adapted to the physicality of the league, he is a clever footballer, technically very gifted and he gets in very good goalscoring positions and is calm and composed,” said Martinez.