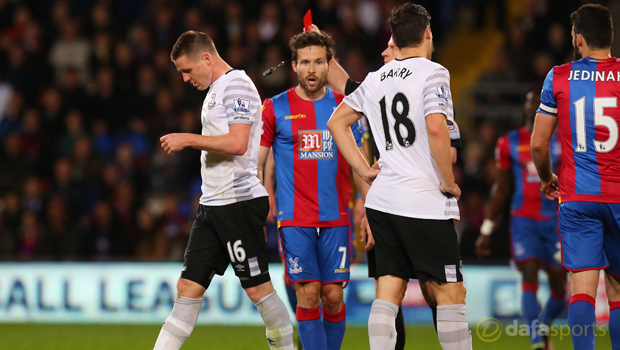 Roberto Martinez felt Everton midfielder James McCarthy was hard-done by in collecting a second yellow card in the stalemate with Crystal Palace at Selhurst Park.

The Republic of Ireland international was given his marching orders by referee Bobby Madley shortly after half-time for an apparent body check on Yannick Bolasie.

While the Toffees boss conceded he saw little reason to complain at the time, he felt after reviewing the incident on television that McCarthy had been the innocent party in the incident.

Martinez said his player made no attempt to foul Bolasie and could not disappear when the Palace winger ran into him.

“When I saw it live I thought it was a second yellow card, but when you watch it again it’s very, very harsh,” Martinez said. “I don’t think it’s a yellow card at all. The ball gets played forward and it’s almost Yannick Bolasie goes into James McCarthy, who can’t disappear.

“He doesn’t intend to get in the way of the Palace player – it’s a very harsh second yellow.”

Everton’s defence has come in for criticism at times during a disappointing league season for the Toffees. However, with 10 men for a prolonged period on Wednesday, Martinez was happy to see his backline stepping up to the task in the face of mounting Palace pressure.

He also felt that his team were able to carry sufficient threat of their own to ensure it was an even contest, even allowing for the numerical disadvantage.

“When you play for a long period with 10 men you’re going to get tested,” he said. “We had to defend with good concentration and strong resilience. I think it was important to show that. You look at how many chances we created and it was just as many as Crystal Palace.”