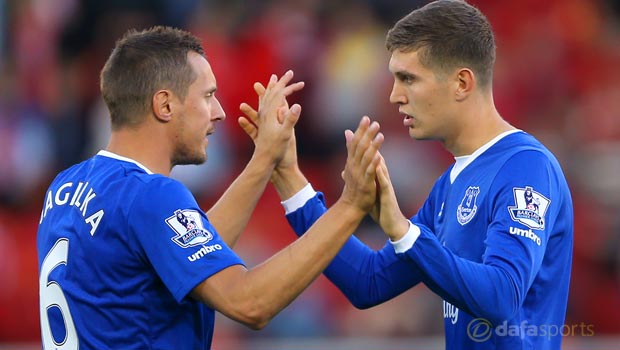 Everton boss Roberto Martinez feels Phil Jagielka and John Stones have formed the most effective partnership in the Premier League.

The duo again impressed as Everton held Swansea to a goalless draw at the Liberty Stadium on Saturday.

Stones has been thrust into the limelight in recent weeks following Chelsea’s unsuccessful pursuit of the centre-half over the summer but Martinez believes the influence of Jagielka has played a key role in the 21-year-old’s development.

When asked if there was a better central defensive pair in the Premier League, Martinez said: “Not for me.

“I don’t want to speak too much because when you do you normally get a setback.

“But when you look at John Stones and the way he performs with maturity, the reason he is allowed to play the way he does is because of the influence of Jagielka.

“I just feel he (Jagielka) has gone to a different level.”

Everton are yet to concede on the road this season but Martinez admits his side are “not built to keep clean sheets” as they place a greater emphasis on attack.

The Spaniard was pleased with his side’s attacking display at Swansea despite their failure to find the back of the net.
He added: “We are not built to keep clean sheets. That’s the truth.

“We are built to be attacking and score goals but we have to defend, and when you look at that clean sheet many people will be pleased.

“We are pleased that we kept a clean sheet but also had the best chances of the game and created clear cut opportunities.”

Everton take on Reading in the Capital One Cup on Tuesday and they are 2.15 to win the match or 3.40 to win to nil, with Martinez’s men 21.00 to win the tournament outright.