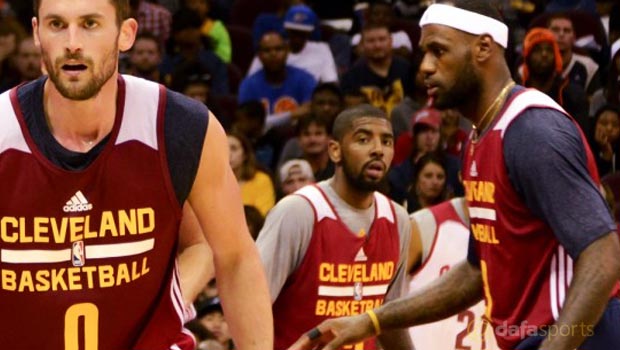 Cleveland Cavaliers point guard Kyrie Irving says his recovery from a knee injury is going well but he will not put a date on his potential return to the court.

Irving played a key role in helping the Cavs reach the NBA Finals last season but sustained a fractured left kneecap that required surgery in Game 1 against Golden State Warriors.

Cleveland went on to lose the series 4-2, despite taking an early 2-1 lead, as they were hit by a number of injury problems, although the loss of Irving was arguably the biggest blow.

The Cavaliers, and all NBA teams, open training camp in the coming weeks but Irving refused to give a time-frame on his recovery and he stressed his side are confident they can go one better and bring the NBA crown to Cleveland this season.

“I’m feeling great,” Irving is quoted as saying by the Boston Globe. “I’m taking my time with it. Obviously, it was a terrible injury but thank God I had the summer to start rehabbing and I’m definitely progressing in the right way. Whatever my timeline is, it’ll be for the betterment of the team and for us to also compete for a world championship at the end of the season.”

Cleveland struggled at the start of last season but found their form after 40 games and managed to take the Central Division title, going 34-9 in the final stages to close out the regular season with a record of 53-29 overall.

Irving is confident they can start strongly this season and challenge for the top prize at the end of the campaign.

He added: “As long as we’re together in that locker room and our coaching staff and everybody is on the same page, we’ll be fine.

“All the expectations people put on us last year, we were aware of it. But for us, it was about us being together when it really mattered and showing people that this was a team to be reckoned with.”