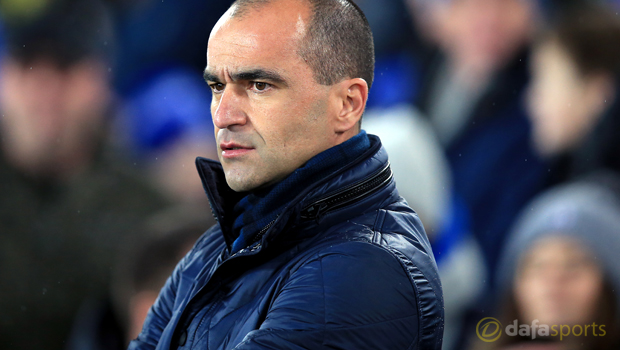 Roberto Martinez was content to take the positives after seeing Everton held by Tottenham at Goodison Park.

The Toffees had conceded seven goals in their previous two home appearances but, despite high-flying Spurs dominating for long spells, the some side were much more resilient at the back.

The Spaniard felt his team were able to foil much of Spurs threat and stop the visitors from getting the ball to their key creative forces in dangerous areas, although he did reveal he was disappointed with the nature of Dele Alli’s equaliser in first-half stoppage time.

He told reporters: “We have been a little bit lightweight in the way we have defended our box and [against Spurs] was an incredible change. The way we defended was a platform for our performance.

“Spurs had a lot of the ball in the first half but played into our hands a little bit, so we were disappointed to concede such a direct goal.”

Despite Spurs bossing the first half, it was Everton that made the breakthrough. Romelu Lukaku nodded the ball down and former White Harte Lane winger Aaron Lennon shot home from 16-yards.

Martinez felt Everton were able to use Spurs high pressing game to their own benefit.

“They had a lot of possession but we knew how to create opportunities because they press so high up. They had a lot of the ball but couldn’t find their key players like Kane, Lamela and Eriksen,” he added.

Lennon, who joined the Merseyside club on a permanent deal from Tottenham on transfer deadline day back in the summer, came in for special praise from his manager.

“It was tough for him because he had to play catch up after not having a proper pre-season and joining on the last day of the window. He is very different to the other wingers we have and to see him was a real joy,” said Martinez.

Everton are in Capital One Cup semi-final first-leg action on Wednesday night against Manchester City at Goodison Park and are quoted 6.50 to win the competition.