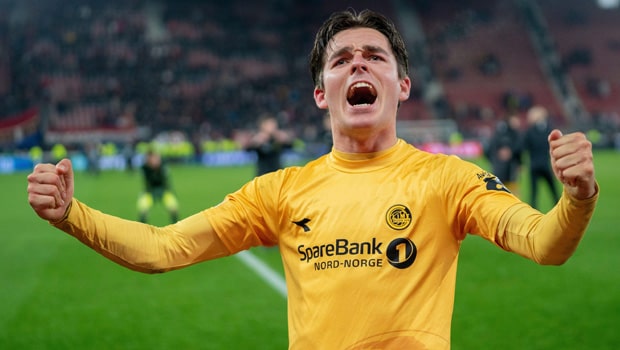 Roma has suffered another defeat against Bodo/Glimt in the Conference League quarterfinal.

This seem to be better than the nightmare they had the last time in Norway they were mauled 6-1.

This was even a game that the Gialorossi first scored, only to collapse late in the game to lose 2-1.

A late free header decided the game after Lorenzo Pellegrini had opened the scoring in the Conference League quarterfinal.

This now means that Roma need to win the second leg at the Olimpico by more than one clear goal to reach the semifinal.

UEFA had recently cancelled away goal rule across its competition.

If the Norwegian club record a draw like they played 2-2 at the Olimpico, they will be out of the competition.

The host still got an important win over the Serie A side despite being without top scorer Ola Solbakken who was out with flu symptoms.

If he returns to action in the next leg, he will be a further threat to the Gialorossi, having scored three of his six Conference League goals against them.

The first chance came through the hosts when Ulrik Saltnes’ his strike, took a tiny deflection off Gianluca Mancini to skim the near post.

Roma’s chance came through Henrikh Mkhitaryan, who fired straight at the goalkeeper, and Nicola Zalewski fired over.

Tammy Abraham collected the ball from from Mkhitaryan with his back to goal. The Englishman turned his marker and forced a desperate one-on-one save from Nikita Haikin.

Just before the first half ended, Roma broke the deadlock in Norway as Mkhitaryan flicked on a Sergio Oliveira through ball for Pellegrini, who on the bounce fired into the roof of the net from a very tight angle at the near post.

Bodo/Glimt restore parity with only their second real shot on target. Brice Wembangomo’s snapshot from the edge of the box took a decisive deflection off Ulrik Saltnes. This completely wrong-footed Rui Patricio, who could only palm it back into the net.

With their confidence boosted, the hosts started pumping balls into the box for increasingly desperate defending.

While Roma were looking for a winner, Bodo/Glimt turned it around in the final minute.

Pellegrino’s free-kick found Hugo Vetlesen, who was totally free and headed in from eight yards.