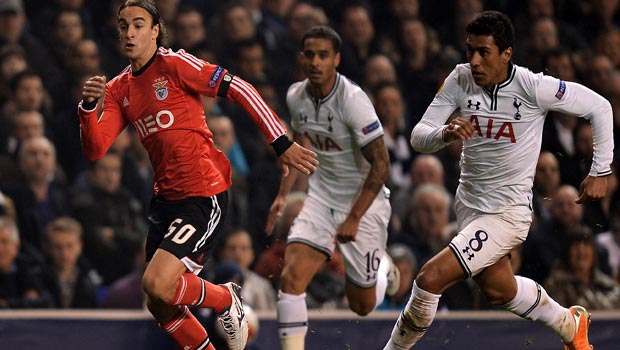 Tottenham were on the wrong end of a 3-1 defeat by Benfica at White Hart Lane on Thursday, and have it all to do to reach the last eight of the Europa League.

It was never going to be easy for Spurs who were thrashed 4-0 by London rivals Chelsea at Stamford Bridge last weekend, and in truth they were completely outplayed by their Portuguese opponents who turned up on a 23-match unbeaten streak.

That record never looked in danger in the first half as the hosts failed to trouble the visiting goalkeeper Jan Oblak, while Benfica took the lead on 29 minutes through Bolton loanee Rodrigo.

A second half brace from Luisao compounded Spurs’ misery, with only a token reply, albeit a superb free-kick from Christian Eriksen offering any hope in between.

So, Spurs’ 11-match unbeaten home run is over, and with the visit of north London rivals Arsenal to come on Sunday, things could get worse for the home fans, and indeed an under-pressure Tim Sherwood, who must surely be worried about his tenure.

“We’ve got to see it over a consistent basis, so I’ve got no complaints about that,” said Sherwood.

“I’ve got no problem with the attitude or desire,” he added. “It’s just we have to hold our hands up and say they’re [Benfica] a class above.”

Defeat by the Gunners would surely end any hopes Tottenham harbour of securing a Champions League place, while for Thursday night’s victors Benfica, a bold bid to go one better than last season’s runner-up position in the Europa League looks a distinct possibility.