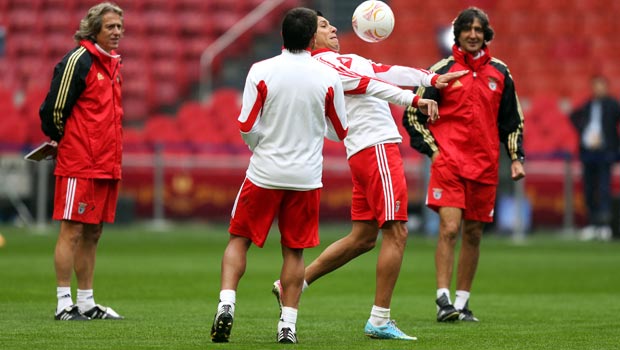 Benfica boss Jorge Jesus insists “there are no favourites” ahead of his side’s Europa League final clash with Sevilla on Wednesday.

The Portuguese giants suffered triple heartache last term as they were beaten in the Europa League final by Chelsea, came second in the league to Porto despite leading for much of the season, and were beaten in the final of the Taça de Portugal by Vitoria de Guimaraes.

This season has been more successful for Jesus’ side as Benfica have landed the Portuguese title and the Taca da Liga and they now have a chance to secure the Europa League crown and the Taca de Portugal, as they face Rio Ave in the final on Sunday.

Jesus believes his side can use the disappointment of defeat in the European final to Chelsea 12 months ago as motivation for their clash with Spanish side Sevilla.

“We have been trying to take the same journey as we did last year,” Jesus said at a press conference. “It gives me satisfaction to be involved when it really matters.

“We have already won things and now we have a chance to win again. We are concentrated and confident that we can win.

“Our experience in finals has an emotional effect on you. It is not a problem but it is not an advantage either. But it has given us greater assuredness and calm this time around.”

Benfica are 2.29 to win the match, the draw is 3.20 and Sevilla are 3.02 to come out on top, but Jesus has stressed he doesn’t think either side should be considered the favourites ahead of the showdown at the Juventus Stadium in Turin, Italy.

He added: “We will be facing a strong opponent with history. It will be a hard-fought match and I don’t see any favourites.”
Benfica will be without suspended pair Eduardo Salvio and Enzo Perez on Wednesday, while defender Silvio has been ruled out with a knee injury and midfielder Ljubomir Fejsa is a doubt with a foot problem.

Sevilla are missing Jairo Samperio through suspension and midfield pair Denis Cheryshev and Sebastian Cristoforo are both injured.