Rostov out to make history 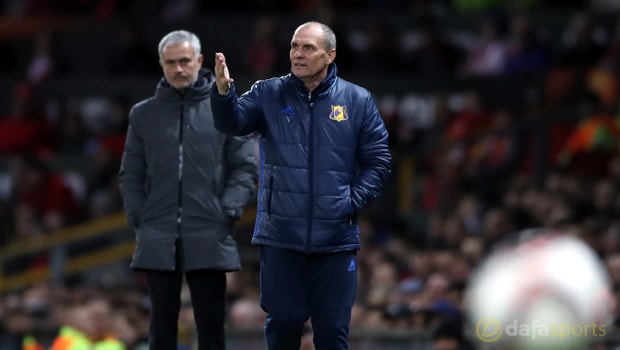 Rostov coach Ivan Daniliants insists his side are looking to make history during the second-leg of their Europa League Last 16 tie with Manchester United at Old Trafford on Thursday.

The two sides played out a 1-1 draw in Russia last week, with Rostov’s Aleksandr Bukharov cancelling out Henrikh Mkhitaryan’s opener for United.

The English giants will be the favourites to progress during the second-leg, but Daniliants believes his side can create history in Manchester and book their place in the last eight.

“Both clubs have their own history, but we are here to make history,” Daniliants said.

“We want to unite and to show a decent performance. We trust in our team. We believe in every single player and I am sure that if we do our best the outcome will be positive.”

Rostov have already enjoyed their most successful season to date in European club competition, recording a victory over Bayern Munich in the Champions League group stage, before convincingly beating Sparta Prague in the last round of the Europa League.

Last week’s draw against United, on what was a questionable pitch at the Olimp-2 Stadium, has done nothing to dampen the team’s belief heading into Thursday’s match, and Daniliants believes his side could thrive on the expansive Old Trafford surface.

“I think every single player of both teams will benefit from using a pitch of the higher quality,” the coach added.

“This is why I would not like to comment specifically on our style of play when we’re using this high quality pitch, just to say everyone will enjoy it.”

Rostov are priced at 6.00 to qualify for the quarter-finals, while United are available at 1.10 to book their place in the last eight.