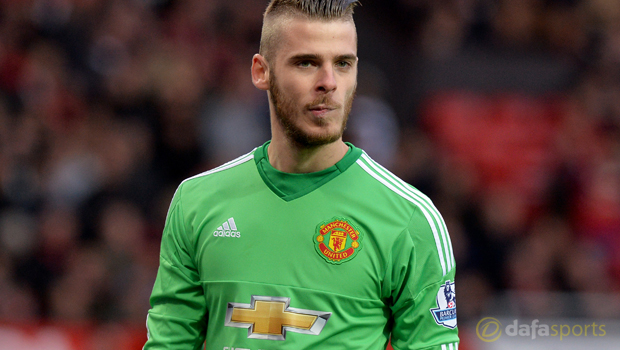 David de Gea is set for scans on his knee after the Manchester United goalkeeper injured himself in the warm-up before the Europa League defeat to FC Midtjylland in Denmark.

The Spain international appeared to land awkwardly when making a save during his pre-game routine on the pitch.

De Gea was taken to the dressing room for treatment but Louis van Gaal had to call on Sergio Romero to start the game, his side left with no replacement goalkeeper for the last-32 first leg tie.

Memphis Depay scored in the first half for but goals from Pione Sisto just before the break and Paul Onuachu 13 minutes from time earned the plucky Danes a memorable victory.

The news on de Gea’s misfortune will be a worry for Spain boss Vicente del Bosque with the start of Euro 2016 now less than four months away.

Van Gaal says his goalkeeper will be sent for scans on his knee but he would not comment on the seriousness of the injury.

“He has a knee problem, we must wait and see. We [will] investigate it with a scan, we can’t answer that now,” the United boss told BT Sport.

“It happened in the warm-up and we didn’t know that, so we will have to wait and see the scan.”

After the Danish defeat, the United boss cited the old saying of Murphy’s Law that “anything that can go wrong, will go wrong” for his team right now.

“When you start the game and your goalkeeper is number 14 [players out injured] then you are not starting like usual I think,” van Gaal said.

“The second half we didn’t win any duel, any second ball. You cannot afford a second goal, but we could have scored also. Jesse Lingard had two remarkable chances, so it is the law of Murphy I think.”

Spain begin their Euro 2016 on June 13 against Czech Republic and are quoted 6.00 to be crowned kings of Europe for a third straight time.