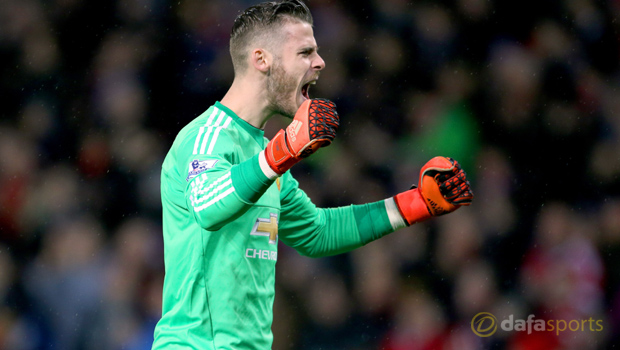 David De Gea insists Manchester United want to win the Europa League this season and the players will be doing all they can to lift the trophy.

The Red Devils have endured a frustrating time in the Premier League this season but the most disappointing setback so far was being knocked out of the Champions League.

Louis van Gaal’s men were expected to breeze through a group that included Wolfsburg, PSV and CSKA Moscow but, after some disappointing performances, the club could only finish in third position.

The Dutch manager has come under huge pressure this term and there were reports suggesting Jose Mourinho was being lined up as a replacement.

Van Gaal is therefore under pressure to win some silverware this season and the Europa League is a realistic target.

United have been drawn against Midtjylland in the last-32 and De Gea, who almost moved to Real Madrid last summer, is hoping the team can go all the way in the competition.

“The Europa League is an enjoyable competition to play in. Naturally I have great memories of when I won in the final [with Atletico Madrid in 2010],” he told United’s official website.

“But this is Manchester United and while we’ve been knocked out of the Champions League, we are now in another competition and we will be trying to win it in just the same way.”

The former English champions are priced at 10.00 to win the tournament, with Bundesliga giants Borussia Dortmund favourites at 7.50.

Serie A outfit Napoli are 11.00 while defending champions Sevilla, who have won the title the last two years, are a 13.00 shot.