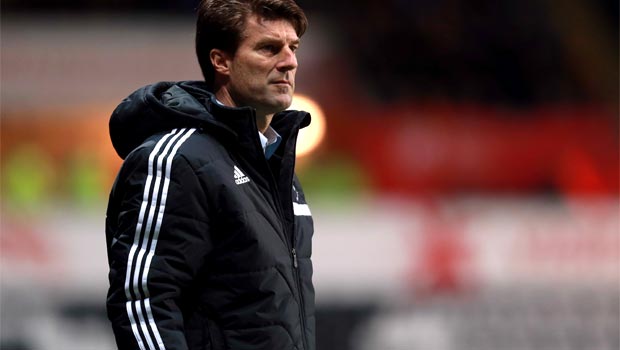 Michael Laudrup believes Swansea have what it takes to go on a long run in the Europa League this season despite only scraping through the group stages.

The Welsh side started off the group stages with a bang after beating Valencia 3-0 away from home but struggled in the subsequent matches against St Gallen and Kuban Krasnodar.

Swansea’s poor run of form in Europe left them needing a point from the last match against St Gallen to progress.

In the end Laudrup’s men had to rely on other results as they lost 1-0 in Switzerland, qualifying in second after Kuban could only draw with group winners Valencia in Spain.

Despite struggling to reach the last-32, Laudrup believes his side deserve a place in the next round and is eagerly awaiting the draw on Monday to see who they are paired with.

“I’m never happy when we lose but we went through,” Laudrup said. “After the draw we will feel differently.”

He added: “We’re there, that’s the most important thing.”

With the likes of Juventus, Napoli and Ajax dropping out of the Champions League and into the Europa League, Swansea could find themselves up against one of the giants of European football if they are unlucky.

Despite the potential to be drawn against one of the powerhouses of Europe, Laudrup is confident the Swans can progress beyond the last-32 stage.

“We are there because we deserve to be there,” he said. “In the knock-out stage everything can happen.

“If you have two good nights you move on, even if you play a stronger team. If you have one or one-and-a-half or two bad nights then you’re out against whoever you play.

“That’s the difference from the group stage to the knock-out phase.”