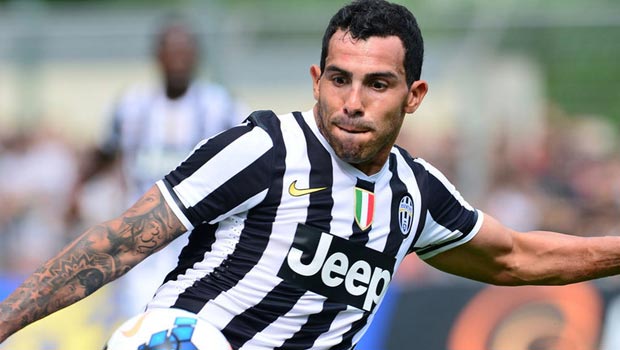 Carlos Tevez is unlikely to start for Juventus in Thursday’s Europa League last-16 clash against rivals Fiorentina because of a knee problem with Daniel Osvaldo set to step into his role.

The former Manchester United striker has been struggling with the problem and will undergo further tests on the knee this week with Juve coach Antonio Conte reluctant to risk him, despite the importance of the first leg match, for which Juventus are 1.35 favourites to win.

Osvaldo, who arrived in Turin on loan from Southampton in January, could return up front alongside Fernando Llorente while Andrea Pirlo is also available after missing Juve’s 1-0 Serie A win over Fiorentina on Sunday because of suspension.

Osvaldo scored in both legs of Juve’s Europa League tie against Trabzonspor in the previous round but watched his teammates extend their lead in the Scudetto standings to 14 points from the stands after being granted paternity leave.

Conte could again opt to pair Osvaldo with ex-Parma hitman Sebastian Giovinco, after they combined well together against Trabzonspor in the last round and have an understanding that dates back several years to their time with the Italy Under-21 side.

Conte, hinting at changes, said: “With the heavy fixture schedule we’ve got coming up, we’ll make our assessments and choose a team that’s capable of winning the game.”

Juventus face a run of five games in 14 days after the first leg tie as they bid to retain their Serie A crown and life the Europa League in front of their own fans when the final is played in Turin in May.

Fiorentina will be without Spanish winger Joaquin who has picked up a thigh injury in training this week, but Borja Valero and Nenad Tomovic are available.

They both missed La Viola’s defeat at the Juventus Stadium because of suspension but are likely to return alongside Alessandro Matri, who has been called up to face his old side, or Mario Gomez – who is also in a 21-man squad.

Juventus are looking to extend their nine-match unbeaten run and have won their last five matches without conceding a goal.

Conte’s side are 2.02 To Win to Nil while Fiorentina are available to back at 6.55 to cause an upset and end Juventus’ winning run.