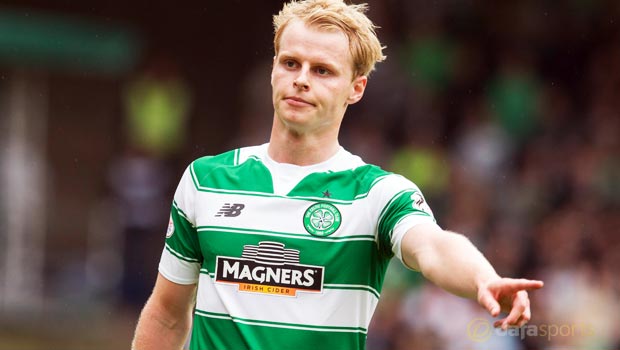 Celtic winger Gary Mackay-Steven says the players believe they can bounce back from Saturday’s disappointing loss to Aberdeen by taking something from their Europa League clash with Ajax.

The Scottish champions slipped two points behind early pace-setters Aberdeen in the Premiership at the weekend after failing to capitalise on having an extra man as they lost 2-1 to a 10-man Dons side at Pittodrie.

The result continued a recent downturn in fortunes for the Hoops, who still appear to be struggling to come to terms with their Champions League exit at the hands of Malmo last month.

Failure to qualify for the group stage for the second season running was a major disappointment for Ronny Deila’s men, despite the consolation prize of a place in the Europa League.

Celtic begin their latest European campaign in Amsterdam on Thursday against Dutch giants Ajax, and Mackay-Steven admits a result against the Eredivisie side would give everyone a much-needed lift.

He told the Daily Record: “We can go to Amsterdam and get a positive result. I’m sure of it.

“We’ve done it before. There is no reason, if everyone is playing like we know they can, that we can’t again.

“We knew Aberdeen could challenge us last season. We know they’re our closest rivals and will be dangerous throughout the season.

“But we know ourselves what we can do. It’s only one game and it’s early in the season.”

Ajax came out on top the last time the two sides met in 2013, with Celtic’s most recent win in Amsterdam coming in 2001.