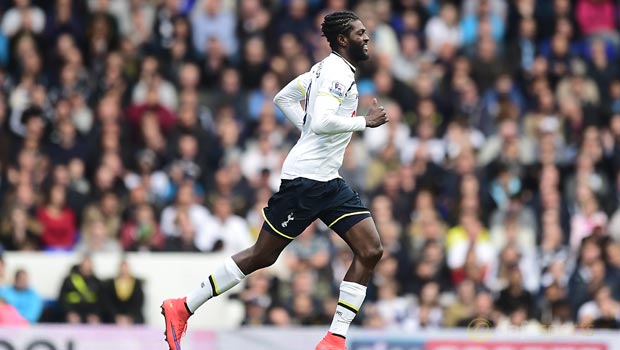 The former Arsenal and Manchester City hitman was made available by Spurs during the summer, head coach Mauricio Pochettino deciding he no longer featured in his plans.

Despite interest from West Ham and Aston Villa, the 31-year-old opted to stay at White Hart Lane.

However, after being left out of the Tottenham squad’s for both the Premier League and Europa League, Adebayor had his contract terminated by mutual consent at the weekend and is now on the lookout for his next club.

Fifa rules state the Togo international cannot join another team until the January transfer window opens but when he is free to sign for someone, Sherwood could be the first manager on the phone.

Sherwood and Adebayor formed a good relationship during their time together at Tottenham, and the Villa boss was desperate to draft the striker in during the summer.

Despite failing to agree terms with Adebayor during the close season, Sherwood says he is still interested in being reunited.

“I would not hesitate if he had the desire to want to come and play football,” said Sherwod.

“He’s too good a talent — I’ve seen that first hand — to not play any football but unfortunately I don’t think there’s any window open for him now [before January].”

For now, Sherwood’s priority is to get Villa’s season back on track after being left distraught by Sunday’s 3-2 loss to Leicester City.

Villa had been 2-0 up with 18 minutes to go before the Foxes staged a remarkable comeback, leaving Sherwood’s men at 2.50 to be relegated this season.