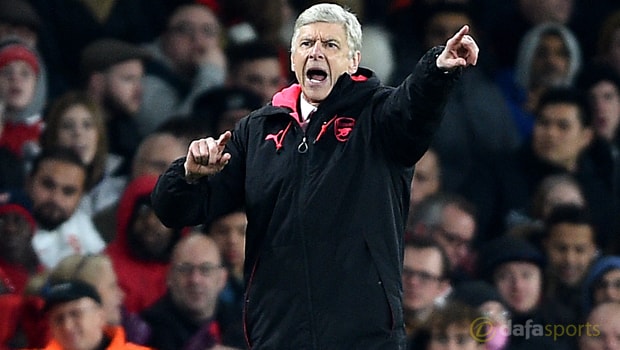 Arsene Wenger admits it was “vital” Arsenal made it the through to the quarter-finals of the Europa League after they secured a 5-1 aggregate success over AC Milan in the last 16.

The Gunners went into Thursday’s second leg of their tie with the Milanese giants holding a 2-0 advantage from the reverse match at the San Siro, but the supporters at the Emirates Stadium would have feared the worst when Hakan Calhanoglu gave AC a 1-0 lead on the night.

However, Danny Welbeck levelled things up from the penalty spot just four minutes later, before second-half strikes from Granit Xhaka and Welbeck again sealed Arsenal’s place in the quarter-finals.

The North Londoners have now won three successive games in all competitions, having previously lost four on the bounce, and Wenger believes it was vital they continued their European journey.

“We were in protective mode, subconsciously, and played a little bit with the handbrake from the start,” said the Frenchman.

“When you’re 1-0 down, you could see the response was in the team and when we pushed forwards, we were dangerous. We finished in a convincing way.

“For the climate around the team, it was a vital result.”

Arsenal are priced at 4.50 to win the Europa League this season and that undoubtedly represents their best chance of securing a place in next season’s Champions League, as they are currently some way off the pace in the Premier League.

Wenger is not giving up hope of qualifying for Europe’s premier competition via their league standing, however, but he knows the Europa League represents an alternative route into that tournament.

He added: “We have targets to finish as close as possible to the top four, and why not benefit from a miracle? But as well, focus on the quarter-final now.”