Trent Alexander-Arnold ruled out of Euros due to injury 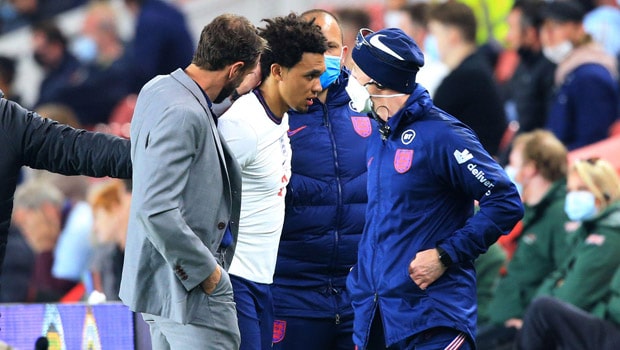 Liverpool full-back Trent Alexander-Arnold has been ruled of the UEFA Euro 2020 after he suffered a thigh injury in England’s 1-0 win over Austria in a friendly played at the Wembley Stadium.

The inclusion of the Liverpool player was well criticized as manager Gareth Southgate picked him for the final 26-man squad despite underperforming for the Reds this season, a scenario that has seen him missed the three Lions last 7 matches.

However, after a scan revealed he has suffered a quad tear, the Three Lions will have to do without the defender and his absence may not be felt with the depth of players in the position.

Trent Alexander Arnold will be out for around up to six weeks on the sidelines.

England will face Croatia, Scotland, and the Chezch republic at the tournament but not before Sunday’s friendly against Romania.

The 28-year-old joined Liverpool from Roma in 2018 on a six-year deal for £66.8m. Since joining Liverpool Allison has won the UEFA Champions League and Premier League titles.

The Brazilian goalkeeper even scored a goal against West Brom in May to become just the sixth goalkeeper in the Premier League to score a goal as his header won the game for Jurgen Klopp’s side.

Meanwhile, in other UEFA Euro 2020 warm-up games, Belgium was held to a 1-1 draw by Greece on Thursday evening.

Thorgan Hazard gave the Belgians the lead in the 20th minute of the game before Greece equalized in the 66th minute.