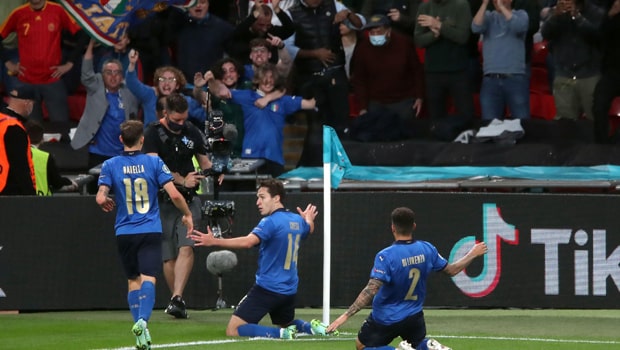 Italy moved into the finals of the Euros for the first time since 2012 after revenging their loss to Spain on Tuesday on penalty shootouts.

Spain and Italy played the first semi-final of the UEFA Euro 2020 at the Wembley Stadium on Tuesday evening as England and Denmark would only play on Tuesday.

After a dominant first-half by the Spaniards, who defeated Croatia 5-3 in the quarterfinals to progress this stage, the second half started with the Italians going ahead against the run of play on the hour mark.

Juventus forward Federico Chiesa scored from a curler inside the box from a counter which Aymeric Laporte thought he had cleared after dispossessing an Italian forward.

Meanwhile, 20 minutes later, Spain got the equalizer after substitute Alvaro Morata was placed through on goal by Dani Olmo to score from close range.

The game went into extra time as Spain played its third consecutive extra time in the competition after doing the same against Croatia in the quarter-final and Switzerland in the round of 16.

Both sides lost their first kicks respectively through Manuel Locatelli for the Azzuri and Dani Olmo for the La Rojas.

The Italians will look to win their second-ever UEFA Euros title on Sunday at Wembley when they face the winner of the second semi-final between England and Denmark.