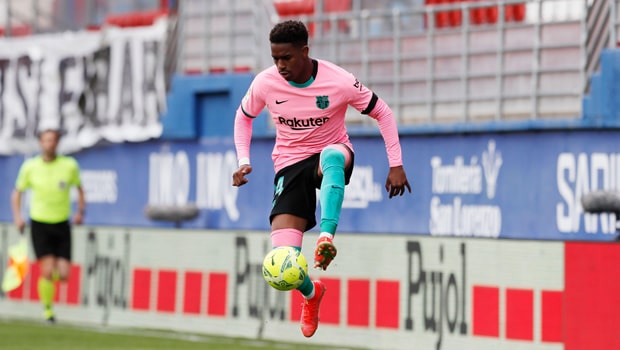 Last week it was reported that Firpo was close to joining Marcelo Bielsa’s side as Barcelona continued to trim down its squad in a bid to reduce its current wage bill.

Firpo moved to Barcelona in 2019 from La Liga side Real Betis making 41 appearances and winning the Copa Del Rey with the team last season.

“I think in this team I can show the player that I am, I know the coach that he is, and for me, he is a really good coach. He wants to press all the time, play one against one many times, and for me that’s my football, Physical football, running, having the ball, for me, it’s not a problem and I think he will help me go to another level.” Firpo said.

Meanwhile, Barcelona has added a 20% sell-on clause to the 24-year-old’s contract. Firpo will be replacing Ezgjan Alioski who left the club this summer.

Barcelona is currently going through a salary-cap crisis as they are yet to register some of their newly signed players this summer.

The situation has made it imperative for the Blaugrana to let go of some of their fringe players with American winger Konrad De La Fuente joining French side Marseille and Portuguese Francisco Trincao moving to Wolves on a season-long loan.

Barcelona is at risk of losing skipper Lionel Messi after the Argentine ran out of contract but even if a new contract is agreed, the club must still release players to free up the wage bill to accommodate new players.

Philippe Coutinho and Samuel Umtiti are also linked with an exit from Camp Nou before the end of the transfer window.