Euro 2020: Trent Alexander Arnold could be deployed in the midfield for England, hints Gareth Southgate 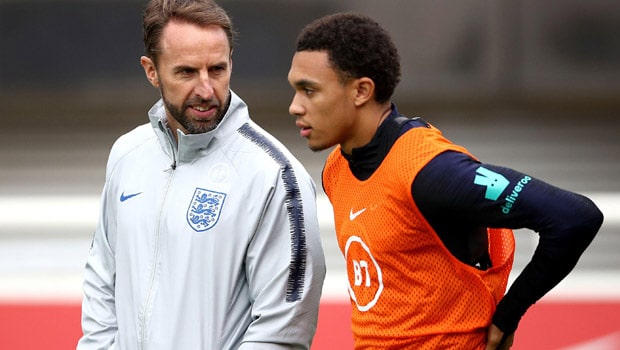 According to England head coach Gareth Southgate, Liverpool’s Trent Alexander Arnold has the passing ability, the vision and the skills required to play in midfield where he might slot in for the Three Lions in the future.

Although the 22-year-old fullback was dropped from the squad for the World Cup qualifiers, he was named in the provisional 33-man squad for the upcoming Euro 2020. That provisional list will be shortened to 26 players next week ahead of the tournament which commences on June 11.

When asked by reporters, Southgate was positive in his response regarding Alexander Arnold’s future in a midfield role.

“I think there’s no doubt he could.

“The difficulty is he hasn’t had the opportunity to do that since he was a younger player and that’s where he came through in Liverpool’s academy,” Southgate said.

At Liverpool, Jurgen Klopp deploys him as a right-back who constantly makes overlapping runs and tries to find players in the box with his passes and crosses. In the Premier League this season, Alexander Arnold assisted seven goals, the joint second-highest in the squad after Sadio Mane. In Liverpool’s title-winning Premier League run last season, he had assisted 13 goals.

“He’s a fantastic passer of the ball and has great passing vision. So he’s a playmaker from right back … So why wouldn’t that lend itself at some point of his career to being in midfield?”

Gareth Southgate also included Manchester United captain Harry Maguire in his provisional squad despite the defender’s ankle injury that might see him miss the Europa League final against Villarreal at Gdansk.

The England head coach revealed that initial assessments of Maguire revealed positive information and he will wait and see how the situation further develops.

We had an initial assessment on Maguire, which was positive in terms of the tournament, but there was always a little bit more swelling and further investigation needed,” he added.

“When you’ve got a European final and information for the opposition is so tight, and things do leak, I understand why clubs want to keep their cards close to their chest.

“It’s made it a bit more difficult for us but I don’t have a problem with United… We’ve got some injuries that are at various stages, (with) a couple that we have very little information about at the moment.”