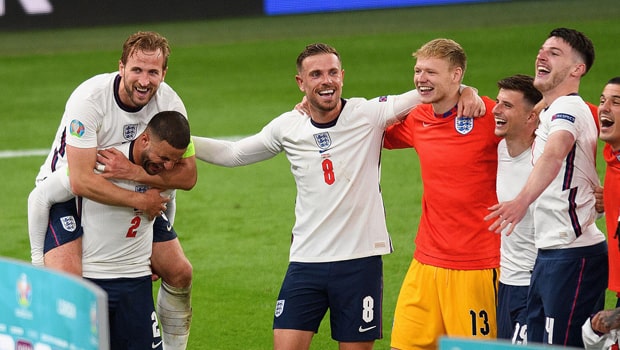 England secured their first-ever major final in over 55 years after defeating Denmark 2-1 in the second semi-final at Wembley on Wednesday evening.

The Three Lions who have had a fantastic tournament without conceding in 5 matches went behind in the first half when Mikkel Damsgaard hit a spectacular long-range free-kick beyond Jordan Pickford on the half-hour mark.

Nine minutes later Denmark Captain Simon Kjaer scored an own goal leaving Kasper Schmeichel helpless after pressure from Arsenal forward Bukayo Saka who sent in a cross into the box.

The second half saw England pile the pressure on Denmark but the Leicester City goalkeeper was equal to the task on every England effort including efforts from Harry Maguire and Harry Kane.

The game proceeded into extra time as Denmark showed fatigue and the Three Lions piled pressure on the team.

Gareth Southgate’s side was awarded a penalty in the first half of extra time when the referee adjudged that Sterling was brought down in the box.

Spurs striker Harry Kane who started the competition slow scored his fourth goal of the competition after putting the rebound from Kasper Schmeichel’s penalty save into the back of the net.

The striker acknowledges the bravery of the Danes who have been running the tournament on the waves of passion and emotions after Christian Eriksen’s incident in their group stage opener.

“Credit to Denmark. We dug deep and we got there when it mattered. We reacted really well – we’re in a final at home, what a feeling. We know it’s going to be a very tough game against Italy we’ve had a great tournament so far. One more game to go at home and we can’t wait.” Kane said.

England will hope to win their first trophy since the 1966 FIFA World Cup, where they defeated West Germany when they play Italy in the final on the 11th of July at Wembley.

The Italians knocked out Spain on penalties on Tuesday and haven’t lost to England in a major tournament previously.