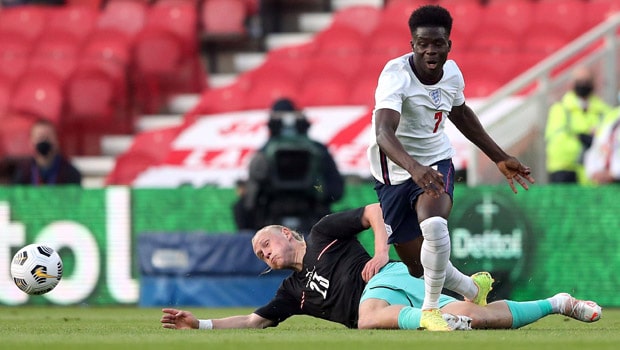 England started their preparations for Euro 2020 with a slim 1-0 victory over Austria at the Riverside Stadium on Wednesday evening.

The Three Lions got their win through Arsenal Midfielder Bukayo Saka who got his first international goal in the 56th minute of the game.

The Arsenal Midfielder got the goal from a team move and ensured that the Three Lions enjoyed a morale-boosting win ahead of the tournament which starts on the 11th of June.

England manager Gareth Southgate only named his 26-man squad on Tuesday but he will have injury worries after Liverpool full-back Trent Alexander-Arnold was pulled off the game before the game with a knock.

However, with four fullbacks picked, England will have no issues in the defensive department. Meanwhile, Dortmund youngster Jude Bellingham became England’s youngest debutant since Wayne Rooney in September 2003.

The result means that it’s the first time that Austria will be losing consecutive games since March 2019 when they lost to Isreal and Poland.

England’s next game will be against Romania on Sunday at the Riverside Stadium in their final international friendly before the start of the Euros.

England faces Croatia on the 13th of June in the opening game of the competition at the Wembley Stadium before facing Scotland and the Czech Republic.

Meanwhile, Austria has a friendly with Slovakia first before playing North Macedonia, the Netherlands, and Ukraine in the tournament proper.

Jack Hendry had given the Scots an early lead before Memphis Depay equalized six minutes later in the 17th minute, Kevin Nisbet put the Scots back in the lead in the 64th minute before a late free-kick from Depay sealed a draw.

In other results, France defeated ten-man Wales 3-0 while Germany was held to a 1-1 draw by Denmark.